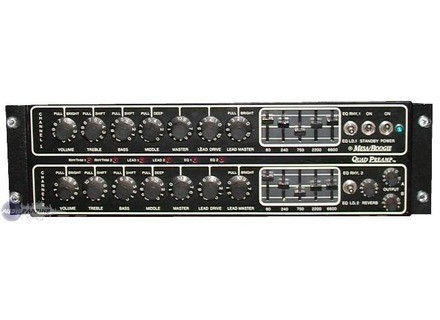 View other reviews for this product:
(Originally written by aliascross/translated from Audiofanzine FR)
Guitar preamp with eight 12AX7 tubes.

Two channels and six modes that can be used simultaneously!

The settings could be finer... especially the volume knobs!

Like the previews review, I find this preamp works best when used directly with a mixer. The sound is really nice (better than a POD2, XT or X3) and very authentic. I compared this application with an amp + cabinet + mic setup and the sound is very similar.

It's obviously possible to get better results in the second application but you'll have to use several mics and fine tune their position.

This preamp gives rather average results with a power amp (VHT BB) + cabinets (NOS v30 and G12h100)... To be compared with a CAE 3+SE, which sounds much better in this configuration).

I give it a 10 when connected directly to a mixer and a 6 with an amp.

I recommend you to connect it directly to a mixer! In such a setup the sound is much better than with a CAA 3+SE plus a Palmer PGA-05. On the contrary, when connected to a power amp the 3+SE is great compared to the Quad...

So I give it a 10 when directly connected to a mixer and 6 with an amp.
Did you find this review helpful?yesno
Cookies help us improve performance, enhance user experience and deliver our services. By using our services, you agree to our use of cookies. Find out more.