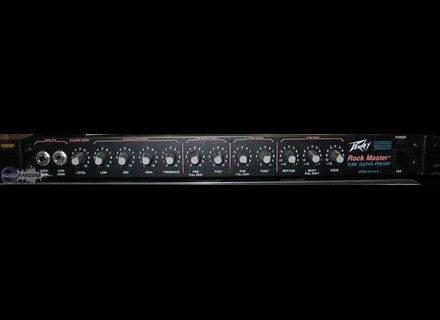 View other reviews for this product:
This is a great sounding and easy to use preamp. Th features and easy of use coincide with the quality that Peavey stands for. Peavey has made some amazing sounding pieces of equipment this is one of those legendary units that still has a great place in today's modern music world. If you want somthing that is cheap but bot cheaply made and that will sound fantastic then this is a great preamp to start with.

This unit has been rumored to have been where Peavey got there inspiration to do the 5150 amps. Most people who have been around guitar amps enough know that the Peavey 5150 amps that were a signature model for Eddie Van Halen have been one of the most used and highly sought after not only for their sound but also for their competitive pricing. I have seen 5150's go for the used price of $450 and as high as %900 depending the conditions and what not.

This unit is essentially a three amp preamp which has a clean gain, and crunch gain, and an ultra gain. These modes or channels all share the same EQing and equally have a place to stand on. Each mode has a great sound and fits into a set list quite well.

There isn't much to get discouraged from or misunderstand with this preamp. The controls are laid out very well and easy to understand. The definitions of each control knob are pretty self explanatory and easy to figure out. The only thing that is unique is probably the post gain which is essentially the volume for the amp.

The tone from this amp is phenomenal. I think the Peavey tone lives on the ultra high gain mode whether it is a 6505, 5150 or this Rock master. The ultra high gain modes in most of not all Peavey amps sounds the best to my ears. I ave ever been a fan of their low gain amps such as the classic series or simply just the clean channels of most of their amps. The uber high intensity is the Peavey tone and most likely will be for ever amp they produce.

These units have been discontinued a long time ago. So the used market is the only way to go to grab this unit. I have seen them for around under $200. That is a great price for this unit. The only competitor for this preamp in my opinion is the ADA MP1 which is another phenomenal preamp. Different voicing but a beats on its own as well. This preamp is a little cheaper than an MP1 , but the ADA has more features.
Did you find this review helpful?yesno
Cookies help us improve performance, enhance user experience and deliver our services. By using our services, you agree to our use of cookies. Find out more.