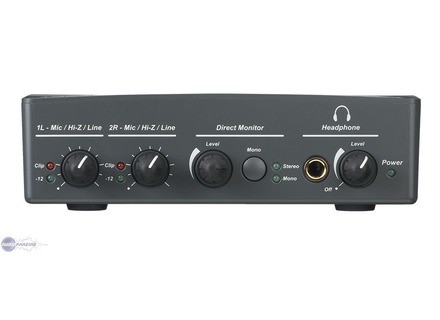 In a world of myriad low-cost audio interfaces, E-MU has made a bold move with it’s new Tracker Pre USB 2.0. Though somewhat similar to it’s predecessor, the 0202 USB 2.0, the Tracker Pre has created a stir due to E-MU’s new CurrentMorph circuit design, which allows the Tracker Pre to offer +48V phantom power and the use of its converters (24-bit/192kHz A/D and D/A ) while using only USB bus power! Is this the answer to the nomadic recording artist’s prayers? Let’s take a closer look…

In a world of myriad low-cost audio interfaces, E-MU has made a bold move with it’s new Tracker Pre USB 2.0. Though somewhat similar to it’s predecessor, the 0202 USB 2.0, the Tracker Pre has created a stir due to E-MU’s new CurrentMorph circuit design, which allows the Tracker Pre to offer +48V phantom power and the use of its converters (24-bit/192kHz A/D and D/A ) while using only USB bus power! Is this the answer to the nomadic recording artist’s prayers? Let’s take a closer look…

Though the box and all inputs are plastic, it’s well made and has a nice finish.. The Tracker Pre is very light, and if you add to this the fact that it gets it’s power from the USB connection and needs no external power, it becomes quite attractive to the nomad in all of us. The design is sober and serious enough not to look ridiculous next to other equipment, but it does not look rugged, so one should avoid dropping it at all costs. The rubber pads on the bottom of the device work well enough to prevent it from slipping off a smooth surface even with a bunch of cables pulling it this way or that. The knobs (with the exception of the direct monitoring knob) are firm and turn with neither too much ease nor too much difficulty. I don’t like the fact that the direct monitoring button turns continuously in both directions. This makes it difficult to know where the level actually is since the marker on the knob isn’t visually shown (it’s black on black and has to be felt or looked at in close proximity) as opposed to the other knobs.

On the front there are the Left/Right Gain Controls, the direct monitor level control, and a 1/4¨ headphone jack.

The Left/Right Gain Controls set the input gain from 0dB to +60dB for the two inputs and each has two (a green and a red) LED signal indicators which show the signal level. The red clip indicators of course light and show that the input level has exceeded 0dBFS.

The direct monitoring works by pressing the button once to turn it on. The stereo LED lights up: in this mode the left and right channels are passed through to their respective outputs at the level set by the Direct Monitor Level control. Press the button again to switch to Mono Direct Monitoring, which sums the left and right direct monitor channels to mono. Mono mode is useful when the two inputs are being used for separate instruments, or when only one input is being used.

The headphone jack is controlled by the adjacent knob which adjusts its output volume. This switch also turns the Tracker Pre on or off.

As stated above, the USB connection is the innovative part of the device. Through E-MU’s CurrentMorph circuit design, the Tracker Pre offers +48V phantom power and the use of the converters while using only USB bus power. This means it can be used for field recording without any power supply other than your laptop. This system works quite well: I didn’t have any issues with extraneous noises or pops. It’s also compatible with USB 1.1 systems, though some features are lost (if you use the unit with a USB 1.1 port on a Windows PC, performance is limited to 16-bit and 44.1/48 kHz recording and playback).

The main output volume is controlled using the System Volume Control on your Mac or PC. I find this quite primitive at best. It’s next to impossible to get precision volume control with Windows’s system volume control, and even though I have all system sounds turned off, I still get an annoying beep coming directly from my computer tower every time is use it! I really think E-MU should have at least given us a real volume control graphic interface.

The Phantom Power on/off switch (you guessed it) turns 48V phantom power on or off to the XLR inputs for use with microphones which require phantom power.

The unbalanced TRS jack inserts (1L & 2R) allow you to insert a signal processor, such as a compressor or EQ, after the mic preamps, but before the A/D converter stage. The Insert jacks can also be used to tap off the mic preamp outputs when using the Tracker Pre as a stand-alone stereo microphone preamp.

The combo Hi-Z / Line / Mic inputs (1L & 2R) have XLR connectors for microphones or balanced line level signals. The 1/4¨ jack in the center of the XLR connector can be used as a Hi-Z input for guitar/bass, or as a line level input. The inputs are balanced, but they accept either balanced or unbalanced input signals. The 1/8" Stereo Mic Input mini-phone jack is designed to accept a stereo, electret condenser microphone. The jack supplies +5VDC phantom power. Mono microphones can also be connected and will use input 1L. It should be noted that the Stereo Mic jack takes precedence over the Hi-Z/Mic/Line inputs. Inserting a 1/8" plug will disable the other inputs.

And last but not least there are two ground lift switches for both analog 1/4" inputs on the bottom of the unit. These switches are designed to stop the hum if a ground loop occurs in your setup; a nice touch since many laptop setups seem to have this problem. 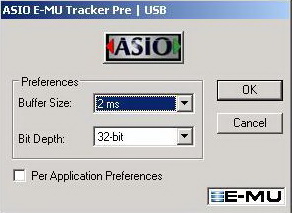 The interface control software is a bit too rudimentary. Apart from the drivers (Asio2, MME and WDM for Windows and Apple CoreAudio for Mac), there’s just an asio panel and a control panel. The control panel lets you choose a skin (if you really care), the device (Tracker Pre or other) and the sample rate (from 44.1 kHz to 192.0 kHz). That’s it! And the asio panel, which needs to be accessed through a sequencer or a standalone VSTi, lets you choose the buffer size (latency) and the bit depth. There’s also a "per application preference" choice, which could be a useful thing to have. 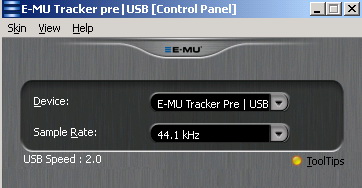 Some might argue that you don’t really need a fancy control panel for such a device, but I think E-MU could have at least put a decent volume and pan control in there instead of having us use the dreaded Windows' system volume control. When I was adjusting levels for the RightMark Audio Analyzer test (more on that later), it wasn’t easy to get the required -1 dB with Wndow’s volume control, and my computer would beep each time I tried! Another annoying issue is that when the volume is totally off in Windows' volume control, there was still sound coming through my speakers, and not that low either.

But what the Tracker Pre does come with, is an interesting and generous « Production Tools » software bundle. It’s a pretty good representation of a few of today’s most popular and efficient software. There should be something for everyone in there.

Ok, so how does it sound? Well, pretty good actually. The converters (with gold-plated connectors) are efficient and the preamps work nicely on both line and mic. There is, however, a certain lack of headroom, so if y 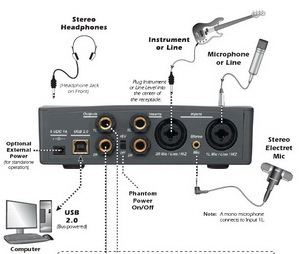 ou’re using low level mic or line inputs you’ll have to be careful when increasing the preamp gain. Over the halfway mark the headroom is really tight, not to mention the jump to hiss near the maximum. Unfortunately, unlike the E-MU 404, the unit does not have a set of LEDs which let you to see the sound level as you adjust the gain knobs - just a red clip LED and a -12dB signal indicator. So you have to blindly feel your way between the two and maybe eventually get the hang of it.

Be that as it may, with Sonar 7, a classical guitar, and a pair of Oktava MK-012-01 condenser mics I got some really nice results. Same thing when I plugged my Strat directly into the device. This combined with the included AmpliTube LE provided a couple of hours of sheer playing enjoyment.

One annoying issue: every time I turned the 48v phantom power on or off, I’d get a not so quiet pop. I don’t see the reason for this. Could it be a flaw in E-MU’s CurrentMorph circuit design? In any event it’s quite annoying, especially when like me, you’re too lazy to turn your monitors on and off every time you should! Apart from that, the USB connection/ phantom power worked fine with no hiss or noise and gave very low latency (I had to increase latency to 7 ms at 192kHz which is more than acceptable, and goes to show just how low latency gets in lower sample rates).Of course this depends on your system. I had to keep latency at around 10 ms on my laptop, which isn't very powerful, in order to avoid pops or glitches.

The zero-latency direct-monitoring is a handy feature but it should be noted that it’s disabled at 176.4-192kHz. Another thing to note is that at the time of this test Macintosh operation was only up to 96kHz. .

Here are the benchmark results using RightMark Audio Analyzer. As you can see, the results are quite good. 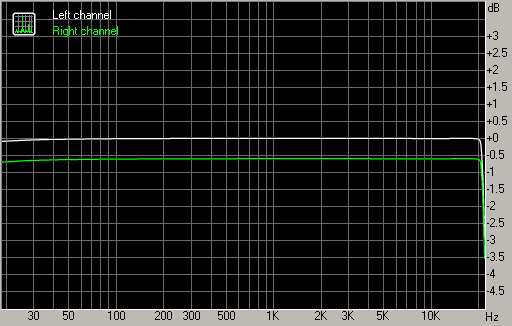 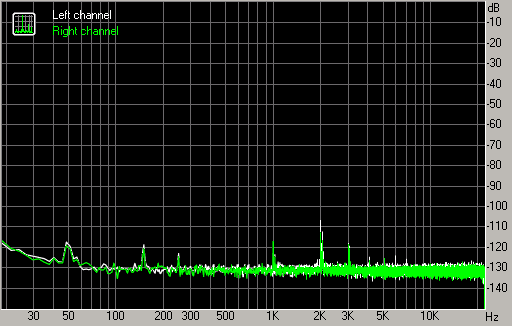 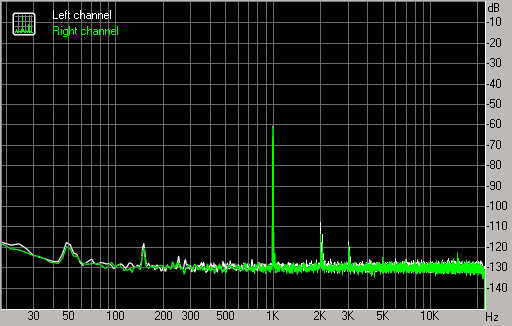 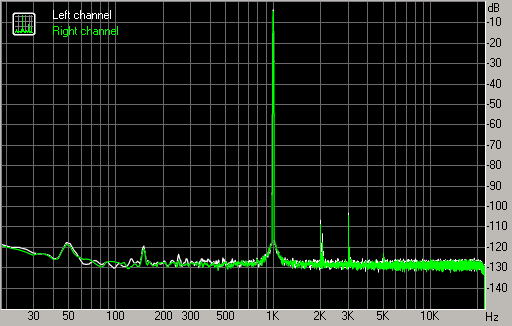 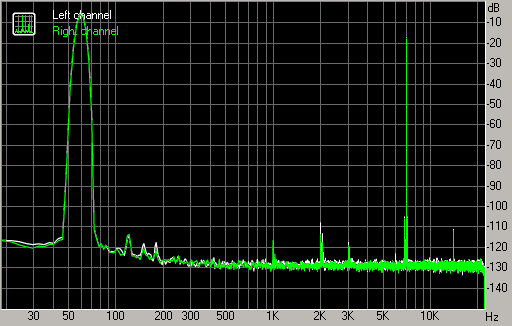 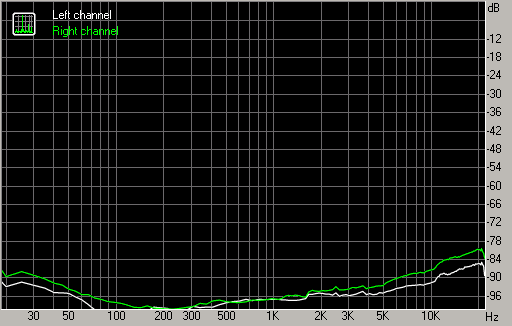 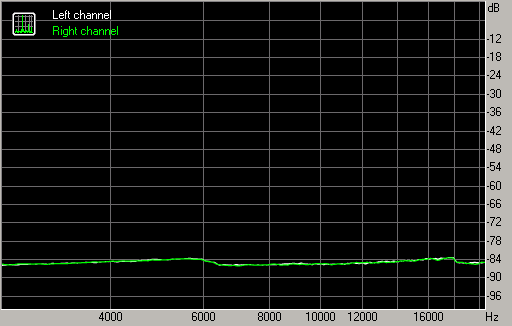 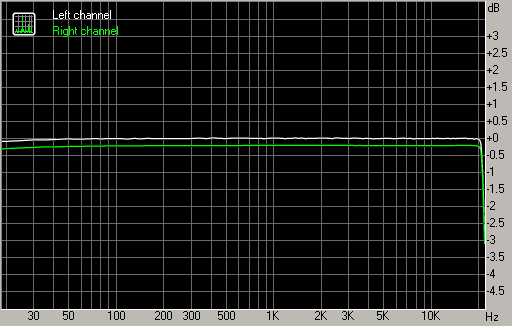 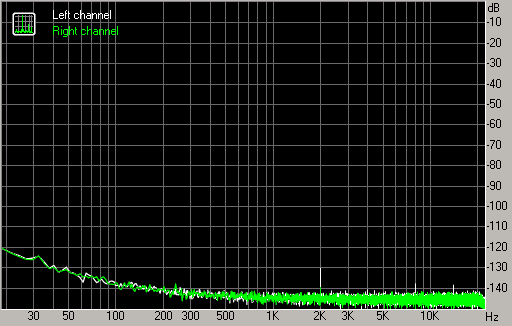 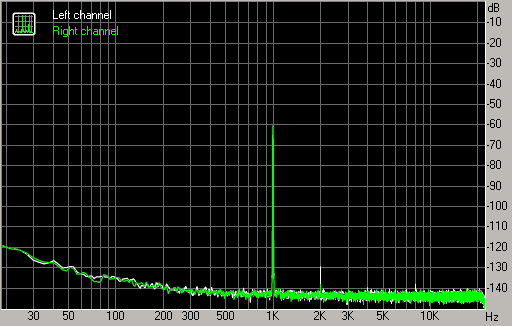 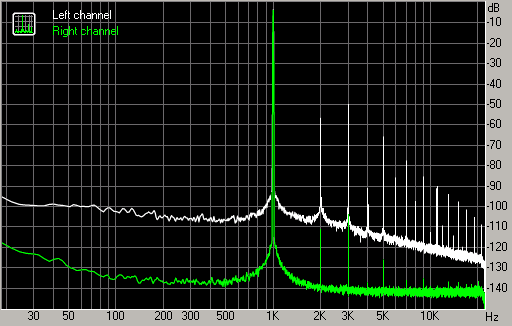 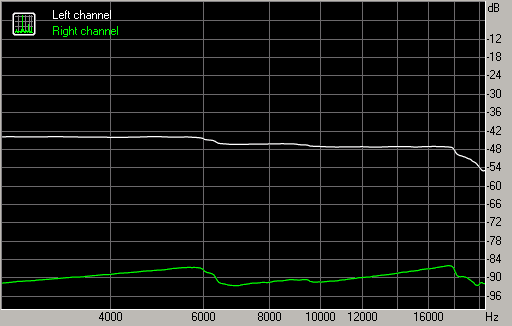 E-MU’s gambit seems to have worked: their CurrentMorph circuit design looks like a winner. Though the device can only handle two input signals simultaneously, it’s able to deal with many different connections thanks to it’s combo inputs and preamps. The drivers are stable and latency is quite low. And though I think it could have used a midi in/out, it seems to be a pretty complete low-cost solution. In addition, the device is designed to serve different purposes (like serving as a autonomous preamp with external power or an audio interface). Even if there are better preamps and converters out there (of that there’s no doubt), the ones on this unit are better than you would expect for this price range. In the end, despite a few quirks, the Tracker Pre USB 2.0, with a MSRP of around $199.99, is a very good value for the money.