Comment
Agrandir
Add this product to
Focusrite Scarlett 18i20
1/ 557 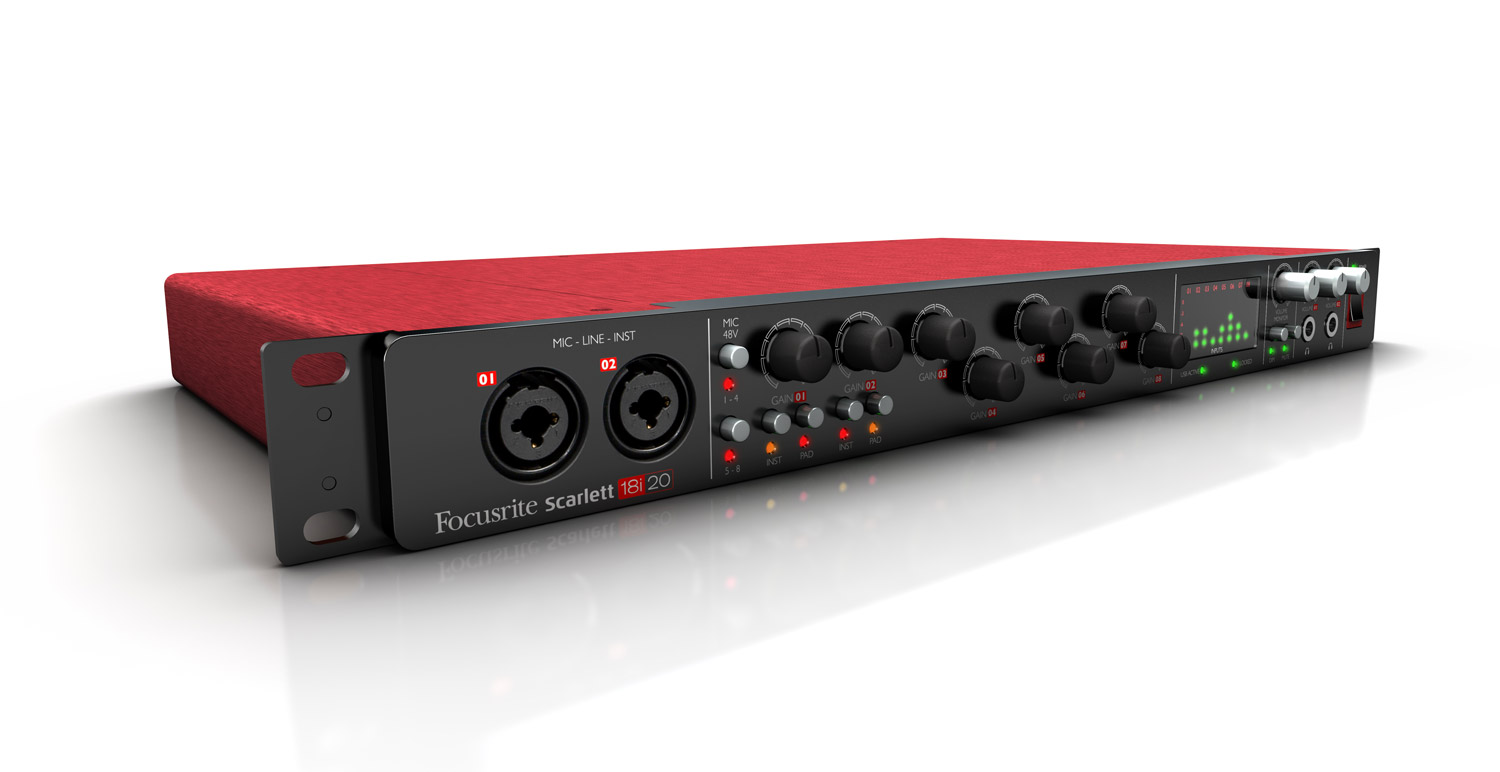 It's almost two years since the Scarlett audio interfaces from Focusrite saw the light of day and the manufacturer has been introducing new models in the series ever since. The newest family member, the 18i20, which was introduced at the last NAMM, has just been launched, so it was the perfect opportunity for AudioFanzine to put it to the test. At first sight, the Scarlett seems to be in top shape…

First of all, we would like to thank Focusrite for having chosen for its family of audio interfaces a name that brings back memories of the physically intelligent US actress and for its red outfit ─ it’s impossible for the Scarlett to go unnoticed. Moreover, every model of the series makes reference to something useful, which isn’t always the case with some manufacturers, and so the 18i20 has 18 inputs and 20 outputs. The main features of the interface are clear right from the beginning.

After stripping the Scarlett from all packaging, we are immediately seduced by its red, brushed aluminum shell, which unfortunately almost won’t be visible when rack mounted. The grayish front panel looks a bit sad with its black knobs (gains) and some aluminum ones (volumes). Everything is well assembled and exudes quality ─ a fine job!

Going into the details, we notice that the 18i20 uses USB 2.0 (3.0 would be of no advantage, considering the number of channels it offers), has eight analog inputs with mic preamps (XLR/TRS jack combos, two of which are on the front panel and also have an instrument input), and 10 digital inputs: eight ADAT optical (four channels at 96 kHz) and two S/PDIF (RCA or optical).

When it comes to outputs, it features eight analog outputs on TRS jacks, two dedicated outputs for monitoring, eight ADAT channels and two S/PDIF. It is worth noting that the two independent headphone outputs on the front make use of two of the four pairs of analog outputs (7/8 and 9/10).

This means that the headphone outputs are not in addition to the 10 analog outputs available on the rear panel. So, if we add to that the 10 digital outputs, we end up with 20 outputs in total. Last but not least, we have a MIDI input/output (5-pin DIN), Wordclock and BNC. An important detail is that the PSU is integrated, which means we won’t have it lying around on the floor.

The front of the Scarlett is very well endowed, but Focusrite was smart enough to leave some space around the gain knobs for them to remain accessible even by thick fingers. However, we cannot say the same about the silver volume knobs (for the headphones and monitors), which have the annoying tendency to slip from our fingers: we would have liked a more rough-textured surface, specially after having a kebab.

The two XLR/Jack inputs on the front panel come in very handy, and the buttons to activate the PAD, phantom power (in four-channel groups), instrument inputs, and DIM/Mute functions of the monitor outputs remain accessible in spite of their small size.

The visual feedback is somewhat austere, with eight columns of five small LEDs. We wouldn’t take levels with them, but they are still informative. Now we only have to install the drivers!

The 18i20 uses the same software as the other Scarletts, namely MixControl, which offers the possibility to do custom routing and access different parameters.

The GUI has several tabs, including one per “mix”, which we can assign to any of the outputs. In plain English, you can have up to four virtual mixers. At the top we find the analog and digital inputs, as well as the returns of the sequencer. Each has mute, solo and PFL (pre-fader listening) options. It is very flexible in terms of outputs and routing: you can assign any input, DAW return or mix to any physical output, either analog or digital.

To the right of the interface we find certain parameters, like sampling frequency, sync source and status, and USB driver status. The Monitor section, besides hosting the main volume control with its mute (featuring LMute and RMute), mono and dim (plus a –20dB pad) functions, allows us to control multi-channel setups (up to 7.1).

The physical knob on the interface controls the virtual knob on the MixControl when the HW Control is engaged. However, the opposite is not true, which is a real pity. We would have preferred an encoder. Similarly, no effect is integrated in the virtual console nor makes use of DSP, which would have enabled processing with almost no latency. What a pity!

In short, the MixControl is very comprehensive and easily assimilated since, in the end, it remains very classic in its conception. Nevertheless, we appreciate the routing flexibility that allows us to send anything (input, DAW return or mix) anywhere (digital or analog output) without too much hassle.

And how does it sound?

To test this audio interface we compared it to our Metric Halo ULN-8, which, it is important to remember, costs ten times as much, but still serves us as benchmark and allows us to evaluate the small Scarlett. We first calibrated the gain of the preamps by placing the mic (a Neumann U 87) in front of a speaker and playing back a sine wave (1kHz). We set the preamp of the ULN-8 at 40dB and adjusted the Scarlett as precise as possible using the input levels of the Studio One. We then started to record on both computers making each run one instance of the sequencer.

Here are both files:

Let’s have some fun playing a guessing game. Which of the two files corresponds to the Scarlett? VOTE HERE!

We also did a “loop test”, which consists in playing an audio file, connecting the outputs to the inputs, recording the input, and comparing the original and the newly recorded file which has gone through the digital/analog and analog/digital converters. The correlation level between both files is very good, 28.5 dB, which puts the interface above the average among the ones we have tested before.

The only thing we could reproach regarding the preamps’ gain ─ which we measured at around 50 dB ─ is that it can be a bit limited in certain situations. On the other hand, the preamps make very little noise: the signal-to-noise ratio we measured was 78.5 dB into a 600-Ohm impedance with the gain fully open. Regarding the minimum latency, we measured 2.95 ms / 130 samples at the input, and 3.97 ms / 175 samples at the output, at 44,1 kHz.

For about €500, the Scarlett 18i20 is a very interesting option for the not-so-wealthy home studio owners who want a digital interface with eight mic preamps. The two independent headphone outputs are definitely an asset and an advantage over certain competitors (PreSonus, for example), while the ADAT inputs/outputs allow for a future evolution.

In terms of routing, it is pretty simple but comprehensive, and the preamp/converters tandem is at the level of what one can expect from a modern interface in this category. We only regret the lack of DSP within MixControl (EQ, reverb and compression), like on Presonus’ VSL.

It’s up to you to decide if you prefer processing without latency or two independent headphone outputs!