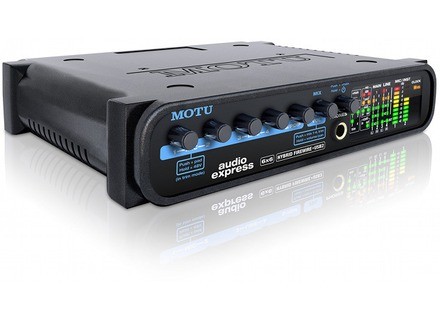 Buy this productView price information >
View other reviews for this product:
I was using the MOTU Audio Express back in 2011; it is a 6 by 6 USB interface that can also be used via Firewire. It is compatible with both Macs and PC’s and can be used as a standalone mixer. Setting up this interface was very easy and quick. It is pretty small and not rackable so it will just had to go on my table top which I was not a fan of but it was not that bad. The preamp is pretty clean for it to be in this price range, I would have actually kept this interface for a long time but I needed to have more inputs so I upgraded but still stayed with the same MOTU line just a bigger interface.

The built in mixer was something that I did not expect to get with an interface of this price and size. Right after I purchased this interface that the controls on the front of the interface did not seemed to be built as well as I would like them to be which is pretty common in smaller interfaces because they tend to lack quality especially when they are at a low price.

The manual do does come with this interface, and walked me through the set up process on both my PC and Macbook. I only had to refer to the manual for my MacBook though because I ran into some small driver issues. I have recorded vocals and guitar tracks with this interface and I was really impressed with the quality of it. I would have kept it but I needed more inputs and also wanted a rackable unit so basically I purchased the exact same unit but it is rackable and has more inputs.