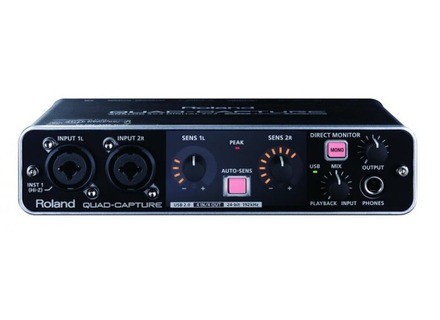 View other reviews for this product:
Which technical specifications motivated your choice?

I wanted a USB soundcard capable of supporting 24/192, a simple unit with stable drivers to stay away of PC soundcards.

Do you use it with other instruments or systems (mixing console, preamp, DtD, ...) and what's your setup? ...

What do you use it for?
It depends on my mood. I use it with my laptop or desktop PC or the Mac, I also use my MiniDiscs, my studio live, my iPads, Ipod or iPhone, Neumann or Shure beta 87a vocal mic with a Voice live2.

Ditto on the Mac. Nothing to say, except that it works perfectly.

Are the drivers stable?
Nothing to say, impeccable.

Are they up to date?
Not right now, but what should I update for? ^^

Which software do you use?
Audacity, Soundforge, Studio one ,Capture

What's the latency of your system?
The what?

How many tracks can you record/playback simultaneously ? ...
My needs aren't' too demanding, but I do anything that comes to my head.
I'm not too limited in terms of Ram.

Was the installation hassle-free?
No problems.

Did you have any incompatibility problems?
None. Neither on the Mac nor on the laptop or desktop PCs.

How complicated is the overall configuration? It's very easy.

Is the user's manual clear and comprehensive?
No, it's useless.
You have to get it from the CD, which I don't like.
It's true that it's not hard to get it going, but then again...

How long have you been using it? Several weeks.

Which feature do you like the most / the least?
The most: The sound, it's awesome.

Did you try any other models before buying this one? I used an old card on the PC or the Studio Live.

How would you rate its value for money? It's exactly what I was looking for, a solid unit (great sound, easy detection)

Based on your experience, would you buy this product again? ...
Without hesitation!
Did you find this review helpful?yesno
Cookies help us improve performance, enhance user experience and deliver our services. By using our services, you agree to our use of cookies. Find out more.