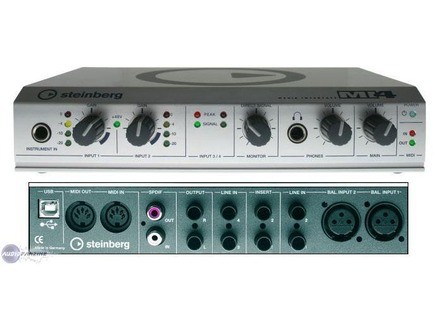 View other reviews for this product:
It is a multifunctional device, midi and audio with digital inputs and outputs. ASIO support is included.
The combination with Cubase makes a device with a reasonable price and report prt employment.

There are drivers for Windows 98, but the sytme trs is unstable especially if you have a deuxime sound card in my case a SBLive. The audio environment has also completely crash after two days. Cubase does not work under W98 (this is not on the packing list)

XP installation is easier, the warning not to connect the unit before installing the drivers does not put enough in obviousness. As against the driver update tlchargable is much more user-friendly install, you just read what is the next level. (So ​​why not make a product in order dpart the ds?)

Most of the software working properly. But the windows of the mixer sliders do not fontionnne, it must be used rabituer hardware buttons, it is sometimes Gnant.
If you have two sound cards you avatage put a shortcut on the desktop to configuring audio sources and slction audi and noon
There are also some freelancing. When some program lowers the zero-channel audio output is muted, it is that the mute box in the mix to check. It should in this case the dcoch manually every time .......

Question quality of its "output" the unit is good trs.
But in the recording mode is the disaster or prsque. In fact, I think of that I had a problem dpart on my table mixer until momenent o I did a test recording directly to one of my last synthtiseur. There is an audible noise that appears trs ds Exceeds the gain half of the race potentiomtre on each channel (1,2,3,4). The noise comes from the computer itself (to them hereunder and mouse movement) acts as the MI4 HF antenna. If I plug the synth on my old SBLive I have no sound recording .......
To have a clean record with the MI4, it is impractical to push the maximum power source, ensuring not to saturate. So trsdlicat. (Select the 44, 48 or 96Khz no difference). To record a techno goes, but not the classic. I will be trssvre for the overall score.
If I had to buy an interface quality I would choose one plutt sparation functions is saying a good midi interface and a good audio interface instead of a product in one.
See the source
Did you find this review helpful?yesno
Cookies help us improve performance, enhance user experience and deliver our services. By using our services, you agree to our use of cookies. Find out more.