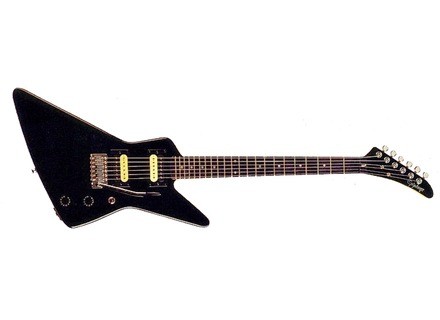 Explorer, V/XPL/FB Shaped Guitar from Epiphone in the Explorer series.

View other reviews for this product:
MODEL I explore the old type 2 Gibson Explorer, which dates from about 10 years ... it has no plate, it noite with silver logo on the head, a vibrato like pink floyd, a rope blocks (useful when you are in agreement so drop like me)
Only 2 knobs unlike The series follows, tone and volume, and the wood is also DIFFERENT ...
a 3-position selector for the pickups but also a face that the new series of Difference ... one dtail trs ugly in my opinion, the pickups black and yellow! but good with black hoods ca the fact !

I also have a jackson ps 2 and I prfre the handle of the Jackson, faster ... but explore it to enter in the register of metal's heaviest genre or no doom metal c impressive one feels the influence of gibson! it seems to crasis notes, plant them as a bass player can do and even in standart tuning so I deprecated the soloists even if ACCESS is acute bon.Donc I think it is not versatile at the touch but it's really for mtalleux a try! I love it! If the vibrato is effective even if I n 'm not used to playing with a vibrato which button rglages affect some hand-palm mute lol! a habit.

The claque! I got it for 200 euros supposedly unmarketable as fresh and I f an excellent deal! Lezs sounds are very clear and very large saturax spend much more powerful than Jackson, even the serious Submitted by standart well but it may be due to oxidation of the microphones because it even when more than 10 years and I had to kiss a notch of the gain v amp so it has potato in good saturmais kan even though I am tempted to put emg pickups on it and put the double Acute jackson ... J'tais interested in a 7 string but a drop in exploring such ca Preska as hard as g carrment banished my bass on my compos! but the clean sounds are very nice and can easily fairesdes arpges crystalline or parts crunchy blues pretty clean.

A great guitar! Geule less than that explored the Gothic but for 200 euros it's worth it! Besides, I think I'll customize! I agree for large parts mtal greasy and heavy but are touched only make it less polyvalente.ls pickups are really nice even if both volume thoroughly she spits ptetre too lol! gain a background rcupre feedback and it is saturating my poor little park 15 watts by inflating both in the grave! With the v amp is a wonder I tried it on a valve and vodoo c'tait really nice!
See the source
Did you find this review helpful?yesno
Cookies help us improve performance, enhance user experience and deliver our services. By using our services, you agree to our use of cookies. Find out more.