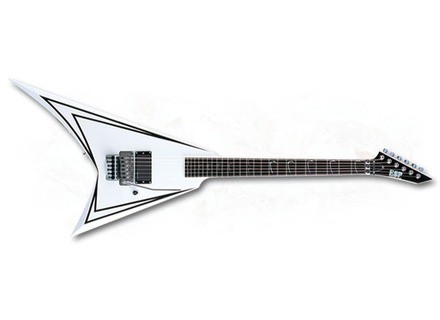 View other reviews for this product:
Alexi Laiho switched from his beloved Jackson guitars to ESP when his Jacksons were stolen and they couldnt make him replacements in time for his touring duties. ESP was able to make a similar guitar in a quick time so now he plays ESP's. These guitars are very similar to what his Jacksons were like but there are a few differences. When they first came out they were pretty basic and pretty much just copies of his old guitars in different colors. This guitar has an Alder body in the offset V RR shape. It has neck through construction with a maple neck and an ebony fretboard with 24 jumbo frets. The inlays are reverse saw tooth inlays that look a lot like Jackson reverse sharkfin inlays. This guitar is white with the large solid stripes on it similar to what the Jackson had. It has an original Floyd Rose like the old Jackson had also. The electronics are the same with a passive EMG H4 pickup with a single volume control.

I think the old Jacksons played slightly better than these newer ESP versions. The Jacksons had a slightly better shape and a compound radius fretboard. The shape on these ESP's is a bit too wide so it is a bit hard to reach the upper frets. The playability otherwise is pretty good. The neck is unfinished like a bolt on neck but since it is neck through you dont have a big block with bolts on it to get in your way. The fretboard is ebony which is great and it has jumbo frets which are also great. The locking nut and floyd rose keep everything in tune when you are going crazy as well.

This guitar has a very 80s tone. It is a throwback to the days when guys had huge racks and needed a super bright over the top guitar tone for any part of the guitar sound to make it through all the effects. The Alexi signature has a bright tone like this. I guess he hates having a muddy sound. Well this guitar is not muddy at all it is super bright and there is no neck pickup to be found for smooth leads. This guitar with its maple neck and alder body really sig and when it say it sings it sings like a siren trying to blow your ears out. The passive EMG are pretty poor pickups. I wouldnt recommend anyone buy a guitar with these pickups in it and this is a full label ESP custom shop guitar and it has them. Alexi is one crazy guy if he likes a sound like this. I think he may be drinking too much.

If you get your guitar you are limiting yourself because there are better options out there. The ESP SV is pretty much this guitar with active pickups and a neck pickup. So that guitar has a better sound and is more usable with the neck pickup. You also can get the Jackson RR24 if you are looking at this guitar because you are an Alexi fan. The RR24 is pretty much exactly like what Alexi played before switching to ESP. Plus it has an active 81 and a compound radius fretboard so it plays really well. I can only recommend this guitar if you are a die hard Alexi fan and have to have what he is playing right now.
Did you find this review helpful?yesno
Cookies help us improve performance, enhance user experience and deliver our services. By using our services, you agree to our use of cookies. Find out more.