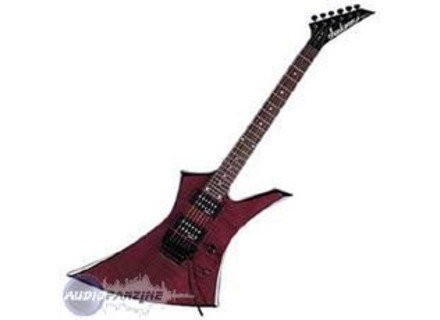 View other reviews for this product:
I ordered this guitar from Guitar Center, because I knew that they would have it in stock. Also, Guitar Center offered a fairly competitive price for it ($480). It was $30 extra for the nice transparent red finish.

This is the ultimate "step-up" guitar for someone who wants a bright, contemporary sound. Though it can't even be compared to my Ibanez JEM-7V, it is extremely nice for the money you pay. The finishes are great, because Jackson offers transparent finishes on flamed maple. Most of the woods are pretty standard (alder body; maple neck; rosewood fingerboard). The alder body has a very versatile tone. The pickups are versatile as well. They are not too hot for jazz, yet not too mellow for metal. This guitar is for someone who is dedicated to their instrument but can't afford an expensive custom shop Jackson. Also, the shape is that famous, yet modern Kelly style much like the Gibson Explorer.

What I don't like is Jackson's Tech Support. Unfortunately, the hole in the bridge for the whammy bar became stripped, so I could not keep it in. I called Guitar Center who gave me the number for Jackson. Then, I found out that there was no such phone number. I called directory assistance for Jackson's phone number (Fort Worth, Texas), and was informed that there were no listings for Jackson there. Later I E-mailed them, and they never replied back. My Floyd Rose remains messed up (though I have developed a neat whammy technique using my hand to add vibrato to chords). Also, it is hard to balance the instrument standing up, and the end ends up getting chipped (the end of mine is bare, red wood now). To add to this, my pickup selector is sort of broken. There is an art to changing pickups
Another thing that makes me sad is that this guitar has been discontinued, but I'm sure that it is readily available somewhere (if you buy this used for under $250, then it is a steal).

The construction is great (besides the fact that the bridge and the pickup selector fell apart). Okay, maybe the comstruction isn't that great, but fortunately, the tone is worth your money. This guitar can seriously squeel. The strings that come on it aren't that bad either, but it sounds great for Funk when you put some Elixirs on this thing.

If you are on a tight budget, and you don't want a piece of firewood like a Squire or and Epiphone, BUY THIS GUITAR!!!