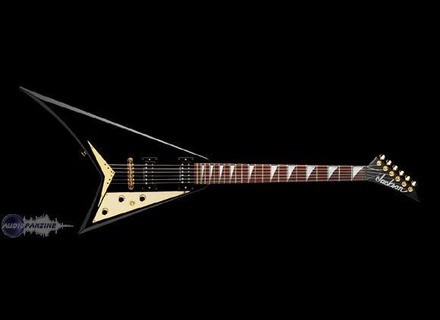 View other reviews for this product:
The guitar was construiste in Japan in the factory they have set up Jackson there in the 80s.
It has 22 frets. Two Seymour Duncan humbuckers. Tune-o-matic.

Two volume knobs (one for each microphone) a tone knob, and a micro switch.

The handle is a "neck-through body."

The neck is just perfect! I rarely had the opportunity to have one in both hands. It glides really well, and is very comfortable. A real treat!
The access to acute, the shape of the guitar, are of course very easy, you touch the strings without problems until the 22nd cargo.

In terms of ergonomics, again, it&#39;s pretty amazing, I was used to my old ex-50, which did not right at all, and that was heavier than a log, and when I went to RR5 ... a new world! The guitar remains stable, which is noteworthy for a guitar of this form. For cons, I noted that if the handle does not stung the nose, the guitar is a tendency to look from the inside, I mean not that the lower part of the body is closer to you than the upper. Nothing too annoying, but with such an instrument, it should be noted. I imagine that this concern can be adjusted with a very good strap, but I like mine, so what if it does not solve this problem, which, as I said, is quite minimal.
A frequently asked question, the game sat. If I was not able to play on sat at the beginning, I quickly retraced my ideas: it is very possible to play sitting down, you find a posture that suits you, but your left hand should rise high as that you play!

As for sound, do not be surprised to have the sick, the Seymour are there to remind us that the guitar is not a toy. I noticed that the microphone was a sharp bit of trouble when we went down a bit down the handle, the sound is slightly less accurate, but again, nothing terrible. I play mostly Metallica, and the trash, I have no desire to have its Dante. Same when I go to the metal higher, or more melodic. The settings very easily.

I play mostly metal, and the guitar is perfect for this, one suspects a little.
Whether Metallica, Trivium, System of a Down, Megadeth, Gamma Ray, Rhapsody ... It adapts to all styles of metal. I even tried the AC / DC, even then, she is doing really well.
I play on a Line6, Spider III 30 Watts (&#39;ll be a better to honor the RR5: /), I use almost no effect when I play with distortion, so the distortion is self own. The sound is huge. By clean, I prefer to use some effects, such phazer, we get very, very nice things (I think I notament effects Combot to play Nothing Else Matters, Metallica, the sound is divine).
Depending on reglagles, the sound can be fatty, cold, crystalline, warm .. Brief. I did not try a different amp than my Line6, it is true that these amplifiers have an advantage when it comes apreciation enough to create sounds, play with the effects, It has a range of sounds which is very significant.

I&#39;m not 10 for this small problem of acute sometimes a bit feeble level precision.

I use this guitar for a month, after having fantasized over for another month, and I am more than delighted to have this guitar in my possession.

I love the handle, which is really great, and the shape and even color (I have version ivory / gold). The guitar in form, is very aggressive, but nevertheless class, thanks to the ivory and gold.
The aspect I like least ... might be that I would have preferred less gold on the guitar, it shines a little even though ^ ^ I love it. I might be preferred rather than the EMG Seymour, but again, it&#39;s no big deal, the Seymour provide a max.

I hesitated between RR5, RR24 and which has only one EMG pickup. The sound was good, very good, but because of this configuration, the guitar is not as versatile as RR5.

Regarding the price, it is high, but I think the guitar is worth it. Originally sold at € 1,399, the small shop where I found it gave me a discount, I paid € 1230, and was offered a special cover Randy Rhoads, high quality, a value of € 90, all the same. In short, it is true that the guitar is cheap, but it deserves this award.

With experience, I will definitely this choice, whatever, if I sub, I will opt for the version USA Series, but it&#39;s more chic to have a guitar for the USA only difference between the two models.
If you are hesitating, then STOP, and whisked away to buy it