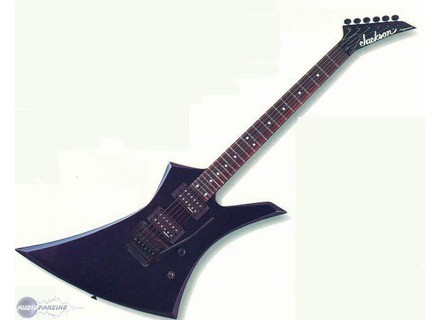 View other reviews for this product:
The Jackson Japan (There are only three places of manufacture for Jackson: United States, Japan and India) low / mid-range factory there ten Danne is a friend to me the was assigned to Pihmisation apprci because he performed work on the Jackson JRR94 (https://fr.audiofanzine.com/produits/avis/index% 2Cidproduit 2C26132.html%)

Given LTAT varnish I lai Fully pumice: the body is composed of five pices of wood!
In fact the tip of horn suprieur is alone in 2 pieces! So the rest of the body (80%) consists of three coins.
Dun it all covered as plating to hide collages! According to the technical description of the test of "Guitar & Bass" in November 1993, it is in Poplar
The Bolt is made of two pices drable as the head tilt is reported, which is less good for the sound handle a pice but paradoxically Confre Resistors better in time!
The key is 24 cases Jumbo frets with rosewood back into plastic ....
JT580 Tremolo Licensed Floyd (Lonewolf confirmation

)
Mcaniques Jackson
2 doubles Jackson J50N to handle and J92C for the bridge, CONTRL a single volume and a 3 slecteur positions.
Tip: The pickups have 4 splitables son and therefore, if we replace the volume by its equivalent push-pull (or lon adds a switch) it doubles the number of sounds

In short lensemble correct in the price from the body 5 picesJe found better than JRR94 while they are both the Japan Professional Jackson dune Danne ten, she t may be less labandon leaves, the microphones are less rust etc..

The handle is typically Jackson, oddly I Laime less than the JRR94! It is true that a lot jai sanded the handle of this dernire which the affine: lol:
I do CCAA acute correct: we are left with the heel (which is fixelattache belt!) In hand from the box 17me! In addition the horn makes infrieure CCAA dernires two boxes quite difficult!
The form draws for Marty Friedman (https://www.martyfriedman.com/) is sympathetic cons I find it fairly comfortable sitting!
Be careful when you put it on a stand, it tends slide!

Note: my friend does not use vibrato and I did not stem! So no opinion on it ...

As the form augurs: its not a guitar Jazz
But strangely jai prfr crunch sound to others! Indeed the style that goes best on this guitar with pickups of origin is the Blues: Who would have thought
Tests of stuff in my time (VHT Rack: GP3, 2/50/2 & Tweed 2x12), the clean sounds are not great crunch sound with the volume back! When you decrease the volume it gets better but you lose a lot of brightness, the sound becomes duller! Ca cest cool is volume and tonal
As we feel the guitar distortion over lese, but we must admit that the microphones show their limits rather quickly
The micro severe drooling as much as his alter ego sharp! In clean (volume down and crunch it&#39;s going in too rough distortion EST.

Jai enjoyable t surprised because generally I find what sounds better than the JRR94, yet the microphones that are less probably better oxide ring! The timber apparently DIFFERENT? My rack has changed? The new season of American Idol? The flight of the swallows Boston? Wind speed Beijing? ? But I Mgar
Overall the two guitars are trs which explains the close similarities between the two opinions

Obviously amlioreraient new pickups probably sound gnrale but they are not so bad!
A small split should rsoudre a lot of problem in its clear, and that&#39;s how we optimize a guitar for cheap
Against distortion as well by ca mtal will mean (precision etc.).

This guitar pretty Gnant ananmoins a default: the handle moves! In fact this happens for two reasons:
Careers News is not dense enough wood are quavec time it starts moving!
Either the problem is the screws in the heel
The good things are moving in all directions, you can either make such effects Dive Bombing: supeeeerrrr (ok jexagre) or carrment bring out the low E key
Once the string bet and screws tight EST perfectly playable but it should not be too hard on the handle by pressing on the head or be too look on the holding of the agreement ...

The shape is a matter of gots, but it&#39;s still fairly comfortable lusage
She had to turn around 4000 francs ago ansCest 10 correct!

To note I am EMBT pffff!
Jaime the look but its not comfortable trs!
Judge the guitar in labsolue or taking into account the problem of race in which case the note trssvre&#39;ll be!
The sound is average but there are far worse ...

Voil of your exact Pihmisation (https://fr.audiofanzine.com/img/membres/normal/1/8/18203.jpg) (Photo of the owner of Kelly)

PM
See the source
Did you find this review helpful?yesno
Cookies help us improve performance, enhance user experience and deliver our services. By using our services, you agree to our use of cookies. Find out more.