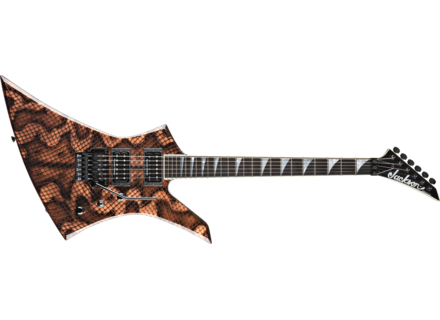 « Different take on the explorer »
5

View other reviews for this product:
The Jackson Kelly is Jackson's take on the Explorer that Gibson has released for ages. It's a more "metal" version that was made famous thanks in part to Marty Friedman. Aside from the unique body, the guitar features an alder body, maple neck with ebony fretboard and shark fin inlays, original Floyd rose, HH configuration, volume knob, tone knob and a 3 way switch.

The guitar is a neck-thru design guitar, so getting to the upper frets is an absolute breeze. Add in the fact that the guitar has a bit of an extended cutaway at the bottom, and it's basically shred heaven. The compound radius on this guitar is absolutely wonderful. It has a smaller radius at the nut to allow you to chord easier, and the radius at the end of the fretboard is greater to allow for easier bending without fretting out. The fretwork is very nice on this guitar, too.

This guitar sounds absolutely ripping. It has a JB in the bridge which has leant itself to nearly every genre in the business. It's mostly suited for rock, but it can do anything from jazz fusion to death metal thanks in part to its nearly perfect EQ curve. The '59 in the neck works great for those fat, fairly smooth lead lines, but it has just enough bite to remain clear under high gain.

The Kelly is a really awesome guitar, and those looking for a different take on the Explorer shape should not hesitate to check this guitar out. Despite its looks, the guitar is actually very versatile, so it should be able to cover a lot of genres besides just metal.
Did you find this review helpful?yesno
Cookies help us improve performance, enhance user experience and deliver our services. By using our services, you agree to our use of cookies. Find out more.