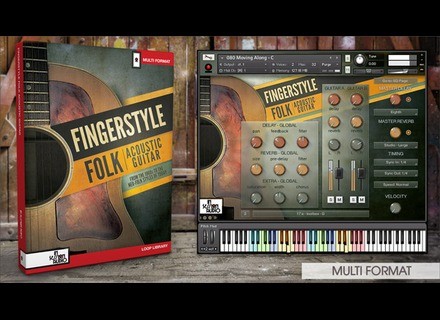 In Session Audio announced the release of its Fingerstyle Folk Acoustic Guitar multiformat loop library with a special introductory price.

Fingerstyle Folk Acoustic Guitar, which had been teased by In Session Audio last October with a free sample pack (see this news), is now available for the introductory price of $69.99 instead of $109.99 in Kontakt, Apple Loops, Acid WAV, Rex, Stylus RMS and WAV 24-bit / 44.1 kHz stereo formats and $79.99 instead of $119.99 if you want to purchase all formats.

The library features post-1960s neo-folk chord progressions, each featuring the sounds of two acoustic guitars playing a main theme together, the first usually being playing in open tuning and the second higher on the neck with a capo. In Session Audio used various guitars, including Bedell BM 17G, Bedell OH 18GS, Lowden 025C, a Regal Tricorne brass-resonator and a Goldtone wood-resonator. All the guitars were recorded with two Neumann KM 184 microphones and a Benchmark PRE420 preamp.

Along with the main themes, you’ll find « toolbox » sections with sustained chords and rhythms that will help you complete your compositions. Kontakt users (requires the full v5.1 version and later) will also get an effect section with, among others, various types of reverb.

You can listen to audio demos at insessionaudio.com.

In Session Audio also announced the upcoming release of Desert Guitars, a library featuring electric, acoustic, baritone and resonator guitars, as well as mandolins, that will make you travel to the US south-west.