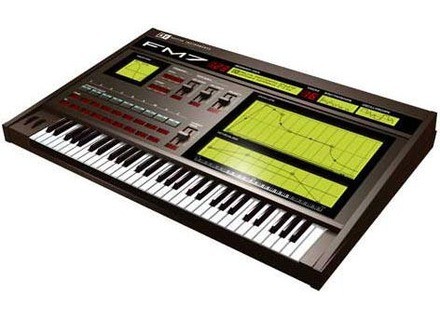 View other reviews for this product:
Strangely I t tonn not find reviews of FM7 and the forum is not provided trs!
To believe that there are few users of this app which would be a shame because if the DX7 has a t REFERENCE (and for me it's always true!) The FM7 is a v rital bomb! PSE and I my words!

Here I fill this gap in my opinion, because I RPET, it would be a shame to spend cot of this excellent emulator.

I am a user of the DX7 THE FIRST time and I always DX7 II and works remarkably well APRS a good fifteen years or so (can be more, I do not remember the purchase of the DX7 II!).

I still use it today on scne honntement I did not find the equivalent sound level employees with current synths! It's true that it has no frills but with some effects in the ass it sounds fabulous.

But then he gets older and I'm afraid of failure (I even internal battery and battery ram the cartridge home, incredible!)
FM7 and the food is for me one of oxygne.

So I try the famous soft, I rcupre my sounds in sysex and rinjectent in FM7.
For the control, of course what better than my DX7 II!

Premire slap, the sound is identical! Well a bit poor as dx! but the DX7 II possde a performance mode that allows you to select two sounds together and among other CRER a pseudo Stereo and has the advantage of sounding unlike the DX7 simple.

The FM7 is not the DX7 emulator performance but with some alterations and added Submitted effect in it, it sounds better than my DX7 II! Wow, second slap!
Incredible, it's the same but better. Also I had to touch the FM programming for ages (I've spent months over the era) and I feel not to have never left. Good is always complex, but the FM program with a small LCD screen with 2 lines of DX from the FM7, there are more photos!

And with hundreds of sound banks in sysex for the DX can be found on the net
it is easier (and advice) to leave its existing dun change his desire to try to program Z to A!

Troisime slap (DCID warms my cheek!), I triturated some sounds and it sounds annalogique! I believe that the approach n'tait not possible with the FM! royal

Ben here I hit the audio outputs of DX7 II and I are off again for 15 years! (J'espre lol)

- Installation is no problem it?
No problem to install, a pleasure!

- Have you encountered any incompatibilities?
No no

- The manual is clear and sufficient? ...
yes but it's clear trs synthse FM and tame it is another story!

- The software runs he correctly on this configuration?
Trs Well, I think he should run well on a lot of config so it uses fewer resources

- What is performance? (If quantifiable)
Superb even with multiple instances open

- How long have you use it?
3 months
- What is the particular feature you like best and least?
The least? nothing! If may be, I well liked that it also contains a performance mode that dcuple its possibilities (though just open two instances but longer to program sounds!)
The most? all, I found exactly but better my DX7 II FM and programming if it is complex, the approach is greatly facilitated with the FM7.

- Have you tried many other models before acqurir?
There is no equivalent

- How do you report qualitprix?
Some would say it is a bit expensive compared to a DX7 good chances but it sounds better, so it's a software s'amliorera I think with future versions as opposed to dx and not fear the down!
Now if I compare the 15,000 francs that cost me (yes!) The DX7 II ben the app is really cheap

- With the exprience, you do again this choice? ...
Plutt twice that!
More with banks of sounds for DX7 sysex available online and in FM7 rcuprable
Well it does not suffer from a lack of sound!

Note: I forgot to add, but the sound volume to an FM7 is supplied with the software.
See the source
Did you find this review helpful?yesno
Cookies help us improve performance, enhance user experience and deliver our services. By using our services, you agree to our use of cookies. Find out more.