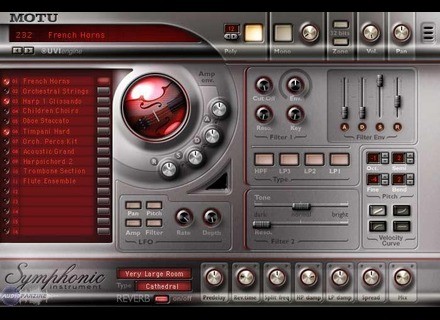 View other reviews for this product:
Major problems during the install. The iLok driver seems to be partly guilty, but that's not all. I had to call tech support to States to solve my problem and the solution they have given me leave me pentoise! The problem was that did not appear in the VST Cubase SX 3. After having tried everything they told me to rename the almond directory Steinberg VST / vstpluggins / and there it worked. Well, I do not know how they programmed this thing, but it is not optimal, in my humble opinion!

I have a Pentium 4, 2 proc. , 1G RAM. Despite this, the pluggin crash all the time. Technical Support MOTU make sure it's a problem with the iLok driver, but I MachFive running for a while with the same driver and the same iLok and it works perfectly with Machfive ... why it gets stuck with MSI, I do not know ....

I use this pluggin for 2 weeks and apart from the crash sounds are good, but it lacks the joints, I think, in the strings. I would have liked to have bine multiple audio outputs, but this may be a luxury. Overall, my opinion is of course altered by the many technical problems, resulting in a final grade not very good.
See the source
Did you find this review helpful?yesno
Cookies help us improve performance, enhance user experience and deliver our services. By using our services, you agree to our use of cookies. Find out more.