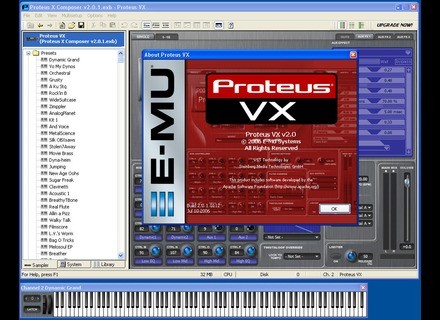 View other reviews for this product:
This software installed flawlessly and speedy, and has worked relatively well on both of my computers. I have used it on a low end computer (1.8GHZ pentium and 1gb ram) as well as my current (2.5GHZ Core2Quad & 4GB ram) and it performs ideally on both. The low end PC does however suffer from latency in the sound which is quite offputting for the software. This is because of the actual computer being rather slow though. But other than that it is pretty fine. The library of sounds was initially a pain to find, as I had to locate the library manually because it did not pick it up automatically. This could be challenging for a new user. It works nicely in both of the DAW's that I use, Ableton and FL Studio. It also works as a stand alone if you do not use a DAW.

This software works well in FL Studio with no hiccups, however when it is ran as a standalone it becomes labourous and does not pick up my Asio drivers. This is a source of latency. If not ran in administrator mode, Ableton displays an error saying that it is not a supported VST. The sounds that come with this are awfully cheap sounding, which you can expect for free software. Every preset sounds low quality and amateur. The memory usage is low, as expected it does not demand much from my computers. This software has crashed a lot of times upon startup as a standalone, This is probably to do with clashing of audio drivers between my Asio4All I run on FL and the standard drivers that it automatically runs in.

I'm not at all really a fan of any of the sounds on offer in this VST, as I prefer the synth sounds in other vsts to this. The real instrument sounds are also pretty mediocre from this VST. The sounds on this are pretty dry and flat, there is nothing at all that stands out with any of the patches in this VST. These sounds are designed for amateurs and new users looking to play a few notes. This VST is great if you are new to FL and want to just play a few instruments but for anyone that's actually looking to create serious music you may aswell avoid it as stock sounds are better than this.
Did you find this review helpful?yesno
Cookies help us improve performance, enhance user experience and deliver our services. By using our services, you agree to our use of cookies. Find out more.