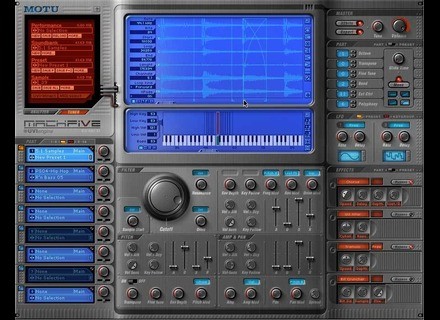 Product replaced by the MOTU MachFive 3.

View other reviews for this product:
Installation on Mac impeccable (as always, ahem ...), but do not be anxious (for a CDRom install ', and a DVD ROM for sounds)
For my part, doc in English, but my port.

I use it for one week is a rgal.
The interface could not be more enjoyable, and clear.
Before making my choice, I tested the two major race condition:
- Gigasampler, who despite his age is a MODEL of the genre, but has to default to turn on PC and not as easily Integrates into a virtual configuration only.
- Kontakt, whose interface is less "sexy", but that the offer of MRIT DFD (since 1.2 I believe) and be easily intgrable (as Mach 5) in a virtual environment.

But prices gal, I prfre all of the same Mach 5, by far!

The same choice? Assurment!
See the source
Did you find this review helpful?yesno
Cookies help us improve performance, enhance user experience and deliver our services. By using our services, you agree to our use of cookies. Find out more.