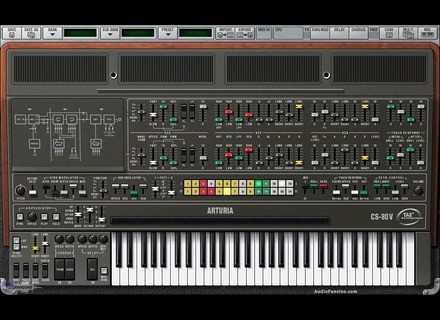 Product replaced by the Arturia CS-80V 3.

View other reviews for this product:
This program installed without any problems. I have a hard time getting some of my stand alone programs to recognize my Presonus Firebox, but all of Arturia's stuff is great for compatibility. I haven't gotten into assigning midi controls from my midi keyboards yet, but it works great in Logic as well as stand alone. This is a copy of a real synth, incase thats not known, so it is fairly complex and tricky to figure out if you are the button pushing type (like me) as opposed to reading a manual type. Obviously this is not the programs fault. Moving through patches is fairly easy, but again, there are so many knobs that it will take some time to really get a grasp of this unit. Thats not necessarily a bad thing, in fact I like the idea of a lot of knobs and whistles, more of those equals more sounds and customization. I have not open the manual yet, as I got a couple software synths at the same time and have been playing around more than learning, but other arturia manuals have been clear and well written, so I would expect the same.

I have a MacBook ( 2.2 ghz, 120 gb hd, 4gb ram, generally use either a presonus firepod/firebox)
So far, the software has never had a problem opening, running, saving and performing.
As for performance, the sound quality is great, nice and rich pads, 80's esq. leads and nice fuzzy/strong basses.
I have never crashed or lost any sound or anything with this program and my setup.

I have been using the CS-80v for about three months now. I love the fact that it has never had any compatibility problems, has great sounds (I don't know exactly what an original CS sounds like) and has some killer pads ( I love pads!). I have other software synths made my Arturia as well as other brands. This one holds its own against all of them. I bought mine off of ebay in a package deal (moog modular and minimoog also) for about $250. I think it was a great deal. I would definitely buy this item again, especially if you like pads.
Did you find this review helpful?yesno