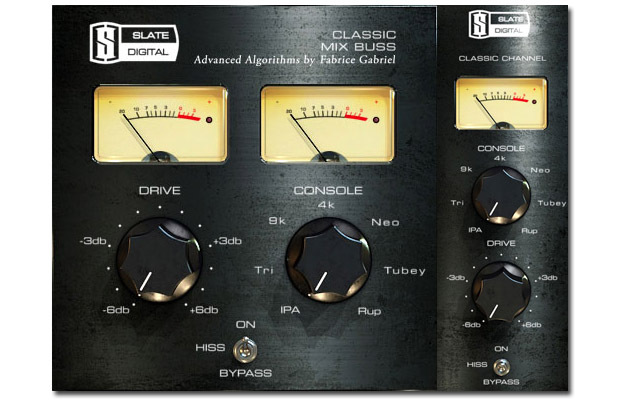 « Analog sound for the rest of us »

Publié le 12/05/12 à 08:54
Slate Digital Virtual Console Collection (VCC) is a suite of software plug-ins (single channel and mix buss versions) that can be used in a DAW. The software can be directly downloaded from the slate digital website. Authorization is down using an iLok2 dongle. Sometimes there are offers of getting a free iLok2 along with your purchase of one of the slate digital plug-ins. If you don't already own an iLok2, this might be something to look out for.
This plug-in was designed to simulate the sound of an analog hardware console. If you think your recordings sound digital/sterile then this plug-in might help your tracks sound more desirable.

Part of what makes an analog console sound different than mixing in the box (ITB) is that individual channels add a little bit of pleasing distortion (harmonics) and subtle compression to an input signal. VCC comes with a plug-in to be used on individual tracks to do just that. Another thing that makes analog consoles sound unique is the mix-bus summing. I don't understand the details of how analog summing is different to digital summing. I assume there is a little bit of pleasing distortion, subtle compression, and possibly some changes to the stereo field in analog summing. Whatever it is, analog summing is know to add dimension or depth to music. There are people that disagree, but in my opinion I like what VCC does to my tracks.

There are several different analog consoles to choose from: SSL, API, Neve, Trident, RC-Tube. To my ears, the Neve console is the most dramatic and adds a lot to drums and bass by thickening up the low end. It really makes the transients punch. The SSL and API models are more subtle and do different things to the mid-range. To get the best idea about the consoles (without purchasing the plug-in) you can listen to demos on the slate digital webpage or even download a demo.

One good thing about the VCC software is that the user can dial in just how much 'drive' or analog sound they want to add. Extreme settings rarely sound good in the context of an entire mix, but its all up to the user to decide.
Compared to other analog console modelers (Waves NLS), VCC has a few of the same models - SSL and Neve, a few different models - API, Trident, RC-Tube, and doesn't have an EMI model that NLS does. The Neve model in VCC adds more punch to drums than the Neve model in NLS to my ears. However, I think the SSL in VCC is more subtle than the SSL model in NLS.
Another difference between NLS and VCC is that NLS models hundreds of individual channels, with each console having dozens of individual channels. VCC only offers a single individual channel per console. If you assume that what makes analog sound analog is the fact that an analog console passes audio 'imperfectly' then it is almost certain that individual analog channels are all going to be differently imperfect. NLS offers the user more individual channels that are all a little bit different. This might also cause you a headache by forcing you to decide between channels that are all just a little bit different until you find the perfect one. With VCC you just get one channel per console, that's it - for better or worse.