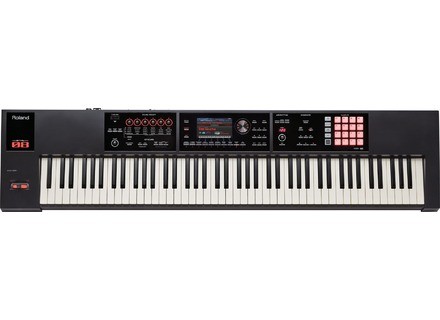 FA-08, Workstation from Roland in the FA series.

Both new Roland FA-06 and FA-08 feature more than 2000 sounds from the Integra-7, including acoustic tones, drums and synths using the SuperNATURAL technology, and a memory allows you to add your own WAV sounds. Note that the SuperNATURAL synth generator is also compatible with the free sound collections available at the Axial Roland website for the Integra-7.

The effect section in the FA-06 and FA-08 offer 16 multi-effects with no less than 67 FX, 6 compressors+EQ for drums, a TFX (global effect) as well as main EQs, chorus and reverbs. A vocoder is also included when the MFX is used on part 1.

Both workstations include a 16-track sequencer with “non stop” loop recording and a16x4 bank sampler based on the SP-404SX technology. You can save the stereo mix of the tracks created in the sequencer and the samples to a SDHC card, and play sounds in the sampler with files stored on the SDHC card. It will also be possible to export audio or MIDI multitrack files from the sequencer to your computer.

As for controls, the command panel on the Roland FA-06 and FA-08 is quite complete, with 16 sample trigger pads, a Sound Modify section with 6 encoders for real time selection of sounds, effects and MIDI devices, a large LCD screen, a D-Beam controller, Rhythmic Motif, Arpeggiator, Chord Memory features, as well as a DAW button that opens the USB connection to the computer, thanks to the built-in audio/MIDI interface. Both keyboards can also communicate with an iPad via the Apple camera connection kit.

Last, the FA-06 and FA-08 offer line and guitar/micro inputs for real time playing with external instruments or mic along with stereo and headphone outputs.

Regarding the keyboards, the FA-06 is equipped with 61 velocity sensitive keys and the FA-08 features an 88 note Ivory Feel-G keybed.

Discover the new Roland FA-06 and FA-08 workstations at www.rolandconnect.com.