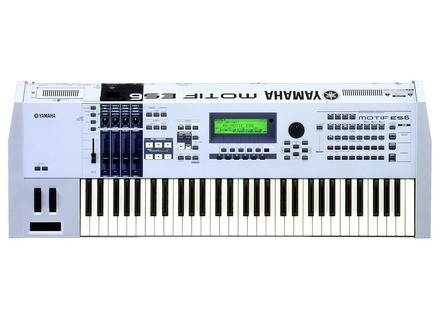 MOTIF ES6, Workstation from Yamaha in the MOTIF series.

View other reviews for this product:
I can not recite all CHARACTERISTICS, so there are a. As to the essential:
-175Mo of samples in ROM
-Stokage: smartmedia, USB 1.1 priph but ...
-Up to 1GB of PC133 RAM (I 2 * 512MB) standards (and yes, the memory of veteran keyboardist I do not know a single sampler hard going beyond the linear array in 512 standard)
Arpgiateur ultra-
- 8 insert effects + reverb and chorus (never sounds "thin" and mix in your squence)
Sound -1024 base + 65 drum kits
Intgration-technology "Keyboard Mega Voice" found on the Tyros (bass, and guitars, is to fall under the ground ...)
-Comes with a 170Mb CD-ROM sound samples, including three layers of the S90 piano, saxophone and sounds of wood and drum loops.
The part-squenceur can grate up 226,000 notes on 16 tracks, with features like Rehearsal Rec mode.
-Mode remote to control or SONAR or CUBASE SX LOGIC from the MOTIF

In short, I have long hesitated to put a euro in a keyboard gnraliste since my ... Yamaha SY77, but l. .. I broke my piggy bank.

For hackers and regulars of the brand, it is not complicated.
By trs cons may stepfather complex for the novice or for anyone who's used other Systmes such as Korg TRITON. But After a few hours (days?) Uses the come back alone.

The edition of his ... for now they seem original dj HUGE, not yet had time to edit, but with 4 lments by voice, it's enough to make a good sound with your favorite samples .

The manual seems a little unreasonable because it n'accde not easily what you want to search. But hey, I have not taken the time to read intgralit.

I am not at all a fan of the brand, as one might think. My Yamaha SY77 ft one of my first keyboard that I kept because I matrise 200%. For I never AIM against the sound yamaha ... until today. Therefore, I have a prfr and KORG KURZWEIL PC2R NS5R.

But having made the rounds, respectively, what is the best at the moment: KORG TRITON STUDIO, ROLAND FANTOM-S, KURZWEIL K2600, the MOTIF ES is my opinion the most versatile and well led. Fan of acoustic sounds, mainly jazz (trad and modern) as well as hip hop, soul, RnB and drive, the MOTIF ES best matches my expectations.

Only the K2600 is lgrement above the noise level and effects (KDFX), but for the price and features, there is no photo.

I love all the sounds except possibly be the saxes, which I find a little too chouilla-synthetic, but the chantionneur is to fill the PB.

The report is qualitprix qu'intressant. While waiting for the Kurzweil K2661, I could not resist the MOTIF ES6.

Day I would put this notice in a few weeks when I could make better use of this machine.
See the source
Did you find this review helpful?yesno
Cookies help us improve performance, enhance user experience and deliver our services. By using our services, you agree to our use of cookies. Find out more.