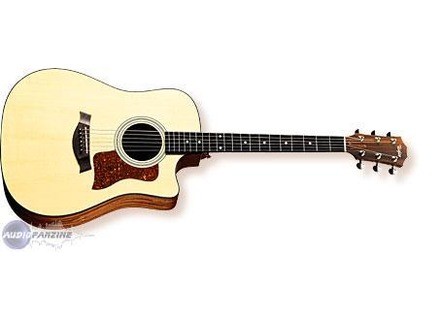 310ce, Acoustic-electric Folk/Western guitar from Taylor in the 300 series.

View other reviews for this product:
Acoustic Guitar made in El Cajun, California in 2002.
It has a handle 20 boxes all accessible through the cutaway. All notes and sound are good enough intonées. In terms of wood used, the table of resonance and sides are sapele, the soundboard spruce, mahogany neck with ebony fingerboard. The glaze and the bottom edge of the box gives a natural feel while the BEYOND soundboard is brighter.
Importantly, the guitar comes with a hard case of good quality but has only one handle, which is not great for carrying the instrument on a long distance.
I put 9 because of the quadruple case that (at least) the weight of the instrument, which has only one handle that cuts a few hands.

The guitar comes with a set of Elixir strings 13/56. And I advise to keep the pulling rope. Indeed, the guitar was perfectly set and delivered pulling no problem .. you'd think the 11/48. (That's what I thought the first time I played). It is learned that to really feel the pulling and you have to beef up a bit.
I plugged in but rarely plays the fishman preamp is good and the notch filter very effective in transferring the feedback.
In addition, the mechanical reliability and maintenance of good agreement.

The sound is super clear and balanced. The guitar projects well. I can play with your fingers and cover the singer with no problem. To pick out the agreements very defined. All notes stand out bien.J 'loves to play chords with the guitar. In the solos note for note, there is no volume jumps from one string to another and the sound remains consistent. I play in jazz and blues styles rather the color of the stamp and suits me perfectly.
The stamp is very modern compared to some of Martin Gibson or other older design. That said I do not put that string in his brilliant (Elixir Nanoweb, D'addario EXP17) for which this guitar was designed. You can really play on the dynamics of the game that will be fully restored in a very direct and precise.
I do not put that 8 becaufe piezo sound is not as good as its acoustic (far from it, alas).

I for 2 years. I play all day. I played with on stage. I recorded it. In all these cases it is still responding positively to my expectations. It is an instrument of very good quality made to last and sounds typical of Taylor (used by Prince, Tracy Chapman, Doyle Dykes, etc. ..). If I had the choice again, I do it again without hesitation. This guitar made me change. She does not forgive any inaccuracy in the technique of the musician who uses it. Apart from the piezo is fairly common and carrying case that protects well but is not practical, I think that is more favorable, and I encourage you to try this beautiful dreadnought.
See the source
Did you find this review helpful?yesno
Cookies help us improve performance, enhance user experience and deliver our services. By using our services, you agree to our use of cookies. Find out more.