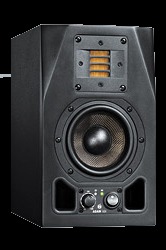 Active Monitor from ADAM Audio belonging to the AX series

An ADAM speaker for under $300? Yes, what used to be a dream is now reality thanks to the small A3X equipped with a 4.5" woofer and the German manufacturer's famous ribbon tweeter. Does it have everything a big speaker has?

With the launch of the new AX Series, which replaced the previous budget A Series, ADAM extended its range adding two new speaker sizes: the big A8X with an 8.5" woofer (tested by MattKorma) and the small A3X we want to review today. Considering the very affordable price of the speaker (less than $300 on the street) the question arises of whether the A3X is worthy of its family or not. Let’s have a closer look… 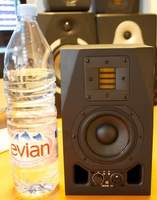 We were surprised by the size of the speaker when we unpacked it. With its extremely compact dimensions (10" × 6" × 7.5"), the A3X can find a place in every home studio. However, it’s slightly bigger than another speaker we tested not so long ago, the Focal CMS 40. On the other hand, it is a bit lighter, which will be an advantage for mobile home studio owners with fragile shoulders. Its design is no surprise, the speaker looks like all its bigger brothers: anthracite finish, two bass reflex ports, woofer without protection grill, and the famous X-ART ribbon tweeter. It’s the ADAM mini-me! The manufacturing quality is flawless and the speaker seems quite rugged. However, you’ll have to protect the woofer during transportation because it has no protection grill. For the lows it uses a 4.5" carbon fiber woofer, unlike the A5/7/8X that use carbon/Rohacell/glass fiber low-frequency drivers. On the other hand, the ribbon tweeter seems to be exactly the same as the high-frequency drivers used on the other speakers in the series, which is very good news!

Inside the speaker cabinet you’ll find two 25-watt (RMS) A/B amplifiers. The speaker is not magnetically shielded so watch out if you still use an old CRT monitor.

On the rear panel you have a balanced XLR input plus an unbalanced RCA input. No 1/4" TRS jacks… The settings allow you to adjust the gain of the tweeter (-/+4dB) and nothing more. The A3X provides no additional acoustic adjustment possibilities, which would come in very handy. The very low price of the speaker has an impact on some details, like this one: don’t expect miracles! The crossover frequency is set at 2.8 kHz and the input accepts signal levels up to +14dB (input sensitivity).

Now, let’s listen to it…

We compared the ADAM A3X with three other speakers: the M-Audio DSM1, the Tannoy Reveal 601A and the Focal CMS 40. The small ADAMs are the most affordable in this collection but not less powerful in any respect. We listened to songs we know very well and tested the speakers within a home studio environment. 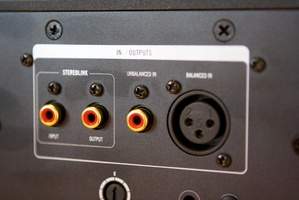 After connecting the A3X, the sound produced by such small speakers really impressed us. The low-frequency response is quite impressive, considering the size, and the high end is very detailed. The mids are a bit weaker, especially compared with the CMS 40. You’ll also have to pay attention to your position in front of the speakers: the sweet sport is not as wide as with the other monitors we tested, maybe because of the ribbon tweeter. With the first listening, the ADAMs seemed to produce more low frequencies than the CMS 40, but as time went by, we noticed that the Focals deliver a more detailed mid range with an atrophied but more intelligible low range.

Now, it’s time to listen to our first song, “Hurt” by Johnny Cash, to compare the ADAM A3X ($600/pair) with the Focal CMS 40 ($800/pair). They are almost the same size and, besides, Audiofanzine already published a review on the CMS 40. Thus, the following is partly the same as in the Focal review.

Cash’s voice sounds closer to the listener with the Focals, but the guitar sounds brighter with the ADAMs. The overall mix is more hollow with the A3X, while high-mids are more accurate with the CMS 40. The depth of Cash’s voice gets a bit lost with the ADAM A3X. Although you’ll have the impression that the CMS 40 sound “boxy, ” at first, in the end they seem more linear than the ADAM. 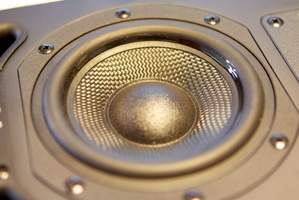 Let’s go on with “Angel” from Massive Attack. The monster bass in this song reveals that the ADAMs can deliver a wider lower end, however the bass does sound more precise and has a more “intelligible” attack with the CMS 40. It might be that the ADAMs low-end tends to mask or blur certain frequencies. The drum kick sounds dryer with the CMS, it has no resonance at all and you can only hear its attack. The electric guitars in the middle of the song sound a bit more like a “bee nest” with the ADAMs.

We switch to Raconteurs’ “Consolers of the Lonely, ” a song with vintage-sounding guitars and very powerful drums. The bass drum seems to be less controlled and a bit softer with the ADAMs, while the Focals reveal a very dynamic response and produce punchy transients. Sibilants of vocals cut through with the A3X and the Focals emphasize the mid frequencies of the guitars. The latter seem to have a more linear and controlled response. In comparison, the ADAMs’ mid range seems to be way back.

Now we turn to Michael Jackson’s “Liberian Girl”. During the soft intro both monitors have quite the same response, but as soon as Michael’s voice comes in, we noticed a lack of low-mids with the ADAMs. Regarding details in the mix (like reverb decays), both speakers sound alike while the Focals score higher on stereo imaging. The ADAMs have more “air” but the stereo image seems overemphasized and the high frequencies are way too upfront. 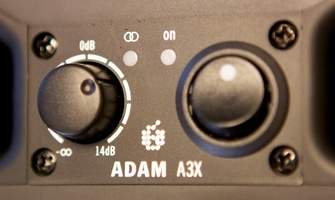 With Metallica’s “Enter Sandman” the Focals show their lack of low frequencies so that the bass guitar and the resonance of the toms stay in the background. On the other hand, the different guitar tracks are easily identifiable. The hi-hat sound is very different with both speakers: the ADAMs have a much brighter sound. Altogether, both models do a very good job with this song.

And what about the double bass on “Walk on the wild Side”? The resonance of the instrument is not audible with the CMS 40, you can only hear the strings! Lou’s vocals seem closer and more present with the Focals. On the other hand, the snare drum cuts better through with the ADAMs.

On Miles Davis’ “Seven Steps to Heaven, ” the double bass seems shier with the Focals but the trumpet sounds smoother and warmer than with the A3X. The ride cymbal has a sharper attack with the CMS; in general, dynamic response and transients are more faithful. With the ADAMs, the attack of the double-bass notes is a bit inhibited by the resonance of the body, which is not the case with the CMS 40. But the sound of the instrument’s body is almost inaudible with the Focals!

On “Thus Spoke Zarathustra, ” the brass sound is tinier with the ADAMs and we noticed the same basic differences as on the other songs. Kettledrums have more depth with the ADAMs, while the Focals reproduce almost only the sound of the skin.

Owning a pair of ADAMs for less than $600 is now possible and, trust us, the small A3X are surprising. The low-frequency response is very powerful, considering their size, and the X-ART tweeter produces a very detailed sound. The German manufacturer seems to not have compromised the manufacturing quality when lowering the price. Plus, the speakers have some very practical details like the front power switch and the stereo link function. We can express our reservations about the accuracy of the low-frequency range, which is a bit imprecise, and the weak mid range (compared to the high-frequencies). Moreover, the lack of real acoustic correction options doesn’t allow the user to compensate these disadvantages. With a very attractive value for money, we strongly recommend these speakers to all home studio owners and music fans who want high-quality equipment but have a limited budget. Just take the few flaws of the A3X into account to avoid unpleasant surprises when mixing. Nevertheless, the ADAM A3X is without a doubt the best compact speaker in this price range.