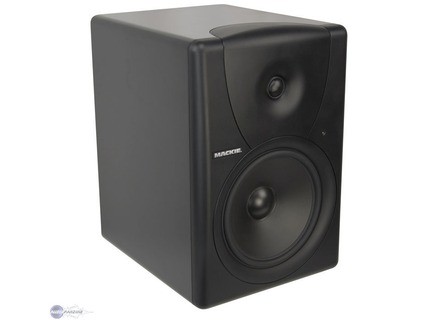 MR8, Active Monitor from Mackie in the MR series.

Product replaced by the Mackie MR8mk3.

Mackie has a long history with monitors. The original HR824 monitors, now in MKII version, are best sellers and standard fare in many studios, large or small.

Mackie has a long history with monitors. The original HR824 monitors, now in MKII version, are best sellers and standard fare in many studios, large or small.


The new MR series that we’ll being testing are entry-level monitors, and therefore on the other side of the price spectrum than the aforementioned hi-end HR series.

Specifically geared towards tight budgets, Mackie has stressed a simple design, with neutrality being the priority - hence the term ‘reference’, with which Mackie has tagged the MR series. So you might say that these monitors are the opposite of many entry-level monitors that are designed to color and make music sound better, which is misleading when it comes to mixing.

The MR line consists of 2 models for the moment: The MR8 and MR5. The latter feature a 5 inch speaker, and are therefore less powerful than the MR8 (8 inch) monitors that we’ll be testing here.

What's under the Hood?

Let it be said right off the bat: the MR8 monitors are quite bulky, so you’ll need to make ample room on your workstation to fit these 40 x 30 x 35cm speakers. All the same, each speaker weighs 12 kilos.

As for amplification, there’s nothing out of the ordinary. The MR has active A/B amplifiers with protection circuits, 100W for LF / 50W for HF (silk-domed tweeters). The cross-over filter between the boomer and the tweeter is 24dB at 3kHz.

On the front panel there’s nothing other than the boomer and the tweeter. The latter is specifically molded to avoid diffraction, with a view to maximizing the sweet spot (the area usually found at the exact center point between two speakers and where the sound is supposed to be most faithful to the source). On certain models, the sweet spot is quite narrow. So you normally would have to spend a lot of time trying to find the right placement on or around your workstation, which is sometimes very difficult or even impossible to get in tight rooms (like a home studio in an apartment). Mackie, true to their mission, has tackled this problem with their entry-level models (we’ll take a look at just how effectively they’ve done this later on).

The rear panel has quite a few things to take note of. First you’ll find 3 different input signal choices, such as XLR (balanced), TRS (balanced), and RCA (unbalanced).

Then just next to the inputs, you’ll find the filter controls. These two switches let you tailor the response of these monitors to your listening room, by adding or taking away 2dB at 5 kHz for highs, and/or adding 2dB or 4 dB at 100Hz for lows.

Now, we come to the aspect which in my opinion is the main design flaw. Of course, a very sober front panel with no switches or knobs looks nice. But when will manufacturers stop putting necessary controls like input gain and even the power switch on the back panel? Is an ergonomic-minded engineer so hard to find? It would seem so seeing as Mackie isn’t the only one to have this problem.

Suffice it to say that the stretching necessary to turn the monitors on and off, or to adjust gain, has annoyed me more than a few times. Of course this isn’t the essential. Once you’ve correctly adjusted input gain, you shouldn’t have to adjust it anymore - theoretically… A monitoring controller ( just off the top of my head) like Mackie’s Big Knob, could be a nice thing to have to use with these MR8s. But then it starts to get expensive.

On a much less humorous note, the air-vent placement can have a more profound effect and turns out to be more complicated. Found on the back panel, they can perturb bass diffusion if the monitor is up against a wall. So be careful how you place them.

In the Listening Room

This famous bass intro from Massive Attack is for me an indisputable "standard" for evaluating bass response. As for that, the MR8 monitors aren’t bad at all! Bass is present, and you can feel the characteristic roll-off under 60Hz, which is sufficient for most needs. Even if it they aren’t as accurate as speakers three or four times their price, they’re still quite usable. Later in the song, the vocal panoramic effects are clearly marked in the listening space. The stereo image is rather wide.

Pink Floyd – Have a cigar

Here’s a tune with an old-school style mix, with a lot of overdubs, especially in the guitar department, which Floyd specializes in. The fact is that they can be clearly distinguished with the MR8s. While moving around in front of these speakers you’ll realize that the sweet spot is indeed relatively large, and that you can move around a bit (within reason) in front of the speakers without losing too much of the spectrum.

On this "oh so 80’s" tune, the mix is very carefully produced and the high-mids are particularly present on these MRs. Especially the snare drum, which is very pronounced, and the reverb tails can be heard. The down side of a wide sweet spot is a stereo image that’s good, but not exceptional. But Mackie’s compromise is still convincing.

Here again, the bottom end of the spectrum is featured. The bass, powerful and round, is still a tad bit muddy but can still be differentiated from the bass drum.

This tune from the Black album features Bob Rock’s "wall of sound" with his layer upon layer of electric guitars. Here again, not much to say, the MRs personality shines through. Nothing stands out and everything seems to be well balanced.

This pop duo highlights Sting’s voice and Clapton’s guitar. The finger snaps in the intro are very clear, and you can hear the overdubs. The MR8s seem quite at ease in this style of music.

At around 600 € a pair, you can’t really say anything bad about these Mackie MR8 monitors. Their neutrality gambit has succeeded for the most part, and because of this their response is much less flattering than much of the competition, something which I personally appreciate very much.

The MR8 monitors are very linear. A well balanced mix will therefore sound….well balanced! And that’s how you can ultimately tell that they’re a real reference tool, and not just monitors that sound good and mislead the home studio owner into thinking that his mix sounds better than it really does.

The lows, though a little boomy, remain usable, and the tweeter delivers clear highs. The stereo image is a little smaller than on other models, but this is no doubt due to the sweet spot being much wider. But yet again, it’s well balanced.

If it weren’t for the annoying issues about accessing the back panel, Mackie would have scored a perfect 10!
Nevertheless, I strongly advise that people with small budgets take a good listen to these MR monitors, which, after all, are a very good value for the money