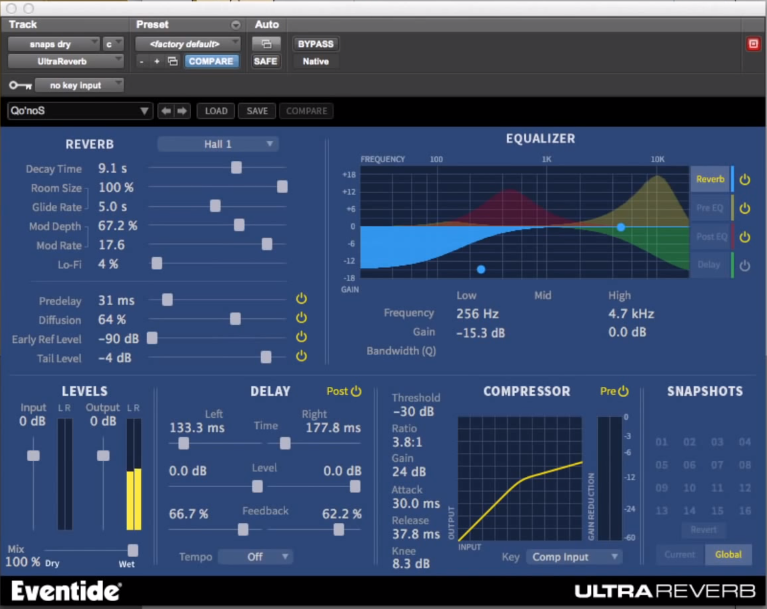 Eventide’s UltraReverb is an algorithmic reverb plug-in that offers impressive sound quality, sonic control and flexibility, making it a potent contender in the reverb plug-in wars. Not only does it feature reverb, but also a built-in compressor (mainly for compressing the reverb signal) and stereo delay line. As a result, it’s useful both for bread-and-butter reverb applications like vocals, snare drums and acoustic instruments, as well as for electronic and sound-design applications.

UltraReverb is compatible with Mac and PC, and supports AAX (32 & 64-bit), AU, and VST. Installing and authorizing UltraReverb on my Mac was easy and hassle free. Eventide lets you choose either iLok authorization or directly computer authorization. Hooray! If only more companies offered a choice.

UltraReverb’s industrial blue GUI is not flashy looking, but it’s extremely well laid out, giving you direct access to its parameters — everything is easy to find and logically laid out. Despite having multiple effects within it, the number of parameters is quite manageable.

Let’s take a quick tour around UltraReverb starting with the reverb controls. A pull-down menu lets you choose one of nine different algorithms including two choices each of halls, rooms, chambers and plates, and one ambience category.

Here's an example of a vocal plate preset from UltraReverb:

Parameters include Decay Time (RT60), Room Size, Predelay, Diffusion, Early Reflection level and Tail level, everything you need to tailor the reverb to your liking. For those more inclined to sound effects, sound design and EDM, a parameter called Glide Rate controls the time it takes the reverb to go from one room-size setting to another, and you can create cool sounding pitch gliding effects by automating the Room Size parameter.

Here's an example of a drum track with some automated pitch gliding:

Mod Depth and Mod Rate control how much (if any) modulation is introduced into the reverb signal and its speed. The Lo-Fi parameter is a bit reducer effect that comes after the reverb in the signal flow, and reduces the perceived bit depth of the signal. Eventide designed it to provide what it calls a “vintage digital” sound, and it basically decreases the high-end definition as you turn it up.

No, we’re not referring to the pre-delay, we’re talking about a built-in full-fledged stereo delay. You can choose to link it to the session tempo and adjust delay time by note values, set it freely in milliseconds, or set the tempo yourself, in which case you also choose note values. Other parameters are Level and Feedback.

The delay is always routed in parallel, not in series, but can be set to Pre, where it’s placed before the reverb in the signal chain — or Post, where it’s after. The effect is more pronounced when set to Post, such as in this example (note: for the first two measures UltraReverb is bypassed):

On the upper right of UltraReverb are its equalizer controls, for which you can do both graphic and numerical tweaking of frequencies. Choose one or more of four different parts of the signal chain to apply EQ: Pre EQ does it’s work after the pre-compressor (more on that in a bit) but before the delay and reverb. Delay EQ affects the signal as it passes through the delay lines. Reverb EQ lets you adjust the reverb tail’s frequencies. Post EQ is after the reverb and delay, but before the Lo-Fi and post-compressor effects.

For the reverb EQ, you get low and high bands where you can set frequency and cut gain. All three others are parametric, giving you low, mid and high bands that can be cut or boosted, and feature a Q adjustment. Like the other sections in UltraReverb, you get the parameters you need, but the GUI isn’t cluttered up with non-consequential controls.

Having this EQ section, you can not only accomplish standard reverb-EQ tasks like rolling off highs on the reverberated signal, but also create some unnatural and cool-sounding effects. Boosts and cuts are particularly noticeable when adjusting the Pre EQ and Post EQ options.

Here's a drum loop, with the highs boosted and a long pre-delay. The first two measures are dry, and then the effect comes in:

You can use the EQ to help simulate different environments. The following example uses the preset named Paneled Room, which has a lot of high end cut in all four of the EQ paths, helping simulate a deadened-room-like sound. UltraReverb is bypassed in the first two measures and comes in for the second two:

In most cases, if you want to compress a reverb, you have to put a compressor after it. If you're trying to compress only the reverb, it's best to do this with a reverb setup as a bus effect in an aux slot. WithUltraReverb, you don't have to open up a separate compressor, it's built into the plug-in, and can be inserted into the signal chain either pre or post reverb. What can you do with it? One possible application is to tailor the decay of the reverb tail by compressing it. For that you'd set UltraReverb's compressor to Post. Setting it to Pre would compress the signal coming into the aux before it hits the reverb.

Compressor parameters include Threshold, Ratio, Gain, Attack, Release and Knee. A pull-down menu labeled Key lets you choose a key input from three different choices: Plug-In Input selects the dry signal coming into UltraReverb, Comp Input takes the key from right before the Compressor, and Sidechain, lets you select an external source as the key.

With all this tweakability, you might think UltraReverb is a little intimidating, but even if you’re not comfortable building a patch from the ground up, Eventide has included a whopping 300 presets to cover virtually any reverb situation. These include both factory patches broken up into convenient categories, and patches by 14 guest musicians and engineers, including Andrew Sheps, Richard Devine, Sasha, and Chris Carter. All the presets are provided both as 100%-wet  buss versions and insert versions that have appropriate wet/dry percentages. Having both patch types at your fingertips is very convenient, and a nice touch.

The factory presets lean more towards bread-and-butter reverb applications and include plenty of instrument specific options. The guest presets are quite varied, but many lean toward the edgy, sound-design side (check out the Richard Devine presets in particular). With UltraReverb having so much programmability, looking at the settings for some of the more extreme presets is helpful for figuring what of settings yield different types of sounds.

Here's a drum loop with one of Richard Devine's patches, called Slow Fader:

If that wasn’t enough programmability, the Snapshots feature gives you sixteen memory positions for each preset, each of which can control a variation on the setting of that preset. You easily save the current state of the reverb to a snapshot location by command clicking.

Then you can manually hit the Snapshot buttons to switch between settings for that preset, or, even slicker, you could automate them (UltraReverb offers comprehensive automation support). If you programmed, say, a slightly different setting for verse or chorus on a vocal reverb, you could easily automate UltraReverb to switch back and forth between Snapshots at the correct times.

When set to Global mode, you can access another 16 snapshots, which are independent of any particular presets. You could save your favorite 16 presets on these, and have a way to switch between them easily.

The algorithms used in UltraReverb are “derived” from the Eventide H8000 UltraHarmonizer hardware processor. The word “derived” doesn’t make it totally clear exactly how similar the algorithms in the plug-in are to those in the H8000, but the proof is in the pudding, and UltraReverb sounds quite good. It got a warm, lush sound, and decays very smoothly.

Here is a comparison of UltraReverb with several other reverbs, using similar settings on the same vocal track:

To my ears, UltraReverb is the smoothest, with RC 48 close behind it.

I’ve been using it as the primary reverb on all my projects for the last several weeks, and was always able to dial up the sound I needed. I feel like I’ve just scratched the surface in terms of programming it.

The only caveat with UltraReverb is that it's fairly CPU intensive. I compared it to a number of other reverb plug-ins, including Waves TrueVerb and RVerb, UVI SparkVerb, Avid DVerb, and Native Instruments RC 24 and RC 48. UltraReverb used considerably more CPU than any of the others except for RC 24 and RC 48, which used almost as much. I don't fault Eventide for this, as CPU power is necessary to create the lush sound quality you get with UltraReverb, but it is something to take into consideration.

For $199, Ultra-Reverb is not an impulse buy, but if you’re looking for a reverb that gives you high-quality algorithms, impressive flexibility, and a built-in stereo delay and compressor, not to mention a huge selection of presets, it’s an excellent choice.