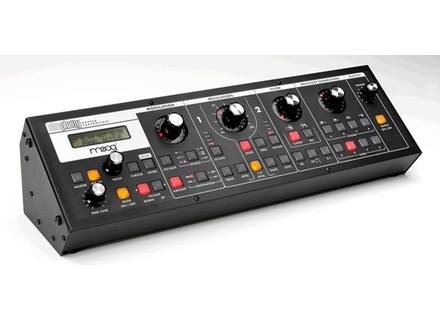 Value For Money : Excellent
View other reviews for this product:
What type of keyboard (synth, piano ...)? How many octaves?

No keyboard is a rack. I have not counted the number of octaves, but I&#39;ve never felt limited at this level. Note nevertheless that this is a true analog, and that it takes time to s "grant". This is quite strange, it&#39;s like a musician who needs to make its range before playing his song. At the beginning, it is wrong in too serious and treble notes, one has the feeling of pushing. After a quarter of an hour max, everything is niquel, and overall even 5min everything is good. According to Moog, however, the beast is not 100% after 45min heating, and it is true that the more he runs, the better it sounds. It really looks like this machine is alive!

How sounds, effects? What styles? Are they edited?

There are presets, which is average, although the overall sound of the machine is so good that even the poor presets are nice (where the presets of a Nord Lead, for example, are simply disgusting and useless) . But we must hack to understand why we spent so much money. Style: 100% electronic, all styles. It can range from techno to accousmatique music to pop, everything sounds with class. Everything is editable despite the low number of knobs. In this regard, it is very well done and it is rare to feel frustrated by the low number. The only annoying thing is the filter cutoff and reso on the same knob, but honestly it is not so disturbing as I thought. To be clear on this point, Moog has developed a system that I have not seen anywhere else, which seems to detect the speed at which you turn a knob to join as soon as the desired position. It&#39;s pretty crazy because no one asks the question, the value moves intuitively to where we wanted it without having to torture the knob, even if we want to go from 0 to max. The machine seems sensitive to the slightest gesture and understand what you want it to do.

There are four control voltage inputs (analog control) for pitch, volume, filter and KB gate. There are twelve o&#39;clock traditional connectors, but you can also connect the midi in / out via a USB cable. Notable thing: there is an audio in. We can therefore insert any audio source in the synth, which will be processed by the filter and the envelope along with the oscillators. For cons, the LFO does not interacts with the audio input. This audio in function is very nice on paper (especially since Moog sells in the manual as an opportunity to make polyphonic) but in the end is not very convincing, I think. Do not expect to have a Moogerfooger MF-101 on hand through an audio in the filter, for example. Its only real use is when you spend a Moogerfooger MF-107, which adds an oscillator (oscillator and excellent) the Slim Phatty.

There is a VST that I find deeply unnecessary and very expensive while the synth is already expensive. Learn a little about how MIDI works will help you avoid unnecessary costs for this synth as for many others. It is not very complicated and the Slim Phatty&#39;s never been a problem for me to be controlled by Cubase or Live. Just read the manual to find out which controller corresponds to which function, and everything works without the need of official VST. Still, I find dare from Moog to pay so much a VST that serves as midi interface and thus produces no sound. Heureusment we can do without.

This synth is monophonic.

Very simple, no-brainer for. Little knobs but it is as if there was a by function. Each knob controls several parameters that you select with the buttons. Nothing more complex: there are a few menus to manage various options. The screen is tiny but perfectly adequate, everything is well thought out. We never thought that this small often with standalone machines: "ah, if only we could do it on his PC ...". Here, everything is intuitive and very little time.

I ordered from Thomann and I got the manual in German! ... I downloaded it in English, it is clear, no complaints.

As simple as if it was 1potard/1fonction. The reaction of the knobs when a parameter we pass to another is very well done, so that you never deal with jumps from one value to another, or things like that.

The sounds they suit your style of music?

This is what I was looking for by going to analog. I love the synth sounds that can be heard on an album as Autechre Oversteps, and I love the German krautrock 70s. I found all these sounds on the Slim Phatty. To be quite frank, I discovered the Moog MF-101, which is a marvel, and I have since bought the MF-103 and MF-107. A small fortune all this, of course, but what made ... The Slim Phatty and the Moogerfoogers give me the impression that I do not need to buy anything for twenty years, so the possibilities are endless!

The effects are they effective and responsive?

There are no effects, the sound is raw.

What are the sounds you prefer, you hate? ...

My only regret is the tendency of sounds to be too bold. I know this is the main argument of the brand, but it also has the reputation of soft and organic sounds, "mellow" would say in English, and this is what I want. The filter Slim Phatty is quite aggressive and the overall sound quickly turns into a kind of saturation. This is excellent and very musical, but I prefer the sweet sounds. That said, with a little patience, I finally get sounds so subtle and round that I had tears in my eyes ... All this to say that perhaps, in the first half hour, you will have the feeling of having really cracked the wallet. But after a bit of taming, you will realize that this purchase was for life, or something like that. It&#39;s simple, at the beginning I had the feeling I was mistaken in my choice, and now I could not do without. Sometimes I spend hours fiddling with the beast, stunned by the sounds that seem to come from another dimension.

Very, very sensitive. If you had only VST far, you will not see a knob in the same way. Every millimeter counts. In terms of playing the keyboard via MIDI, everything goes well. There is no after touch, however.

This is my first synth. At first I was skeptical, I thought the defenders of the analog exaggerated the difference in sound between digital and analog. I was wrong: it is * really * different. It does not mean that digital is bad, however. These are just two different things. Analog sound is difficult to describe, but the first impression it gives me is to be a little magic. It appears out of nowhere, and it is smooth, perfect, really captivating. I&#39;m not going to rant for 50 pages, you just have listened to true (not a Youtube video ...) to understand the difference, which is really a difference and not a little delirious music geeks, I ensures (after much skeptical!)

In short, this is my first real analog. That said, before I tested the Nord Rack 2X, analog synth emulation. The two are not really comparable. I love just as much as the other. My Nord Rack will never give me to tears with a single note, but my Slim Phatty never give me cloths, 20-voice polyphony and other essentials for the things that I am keyboardist. For those who are wondering, I can confirm that the analog emulation Clavia is stirring: it is the only digital synth approach that sound. But I can also confirm that the difference is a real obvious. And that, having tested the Slim Phatty and 3 Moogerfoogers the Moog sound does not seem that expensive when you do not have the thing in your hands. Once the device at home, we do not regret a single euro, and I have never yet had a bad surprise at this level with this brand.

It costs € 35 for the racking ... More importantly, you should know that besides the Yellow Cable, just a little stronger jack does not happen if you put the Slim Phatty on your desktop, because the connector is facing down! It is very poorly thought out. It seems that the device has been designed for the rack ... this is not a fault, but still need to provide the means to racker directly, rather than the rack kit sold separately at 30 €. Thereupon, as the official VST or wooden decorations (100 €! ...), It looks like Moog hope eventually offset the nice price of the synth for its quality.

Good. It&#39;s expensive, yes ... But it&#39;s worth it, and it seems solid (although the knobs appear to be more fragile than those of Moogerfoogers, whose finish is just perfect). We can not say it&#39;s cheap, but for this quality, it is not at all a arnque, far from it. This may be the only product of the brand that is not Abusement expensive. I love Moogerfoogers (you are you probably realize ...), but their price is despite abusive nothing. Here, I find it quite in line with the machine. This is not particularly a "good plan", but it is not a scam either.

€ 777 at Thomann, it requires a lot of thinking ... But if you want a monophonic analog, then you&#39;re pretty sure of keeping this one for decades!
See the source
Did you find this review helpful?yesno
Cookies help us improve performance, enhance user experience and deliver our services. By using our services, you agree to our use of cookies. Find out more.