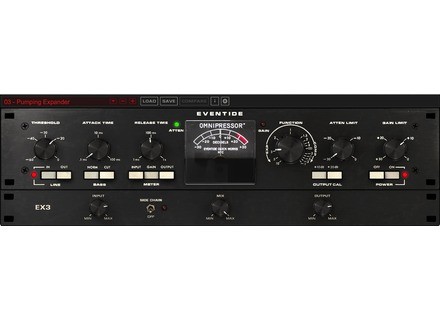 Buy this productView price information >
The Eventide Omnipressor Plug-in is one found in Eventide's Anthology II bundle. I don't know if it is available on it's own, but I don't believe that it is. I didn't have anything to do with installation of the plug-in, as I don't own it and have only used it in a professional recording studio, so it was installed before I got to it. The interface of the Omnipressor Plug-in is pretty simple, and is modeled after the original hardware version of the Omnipressor. I haven't used the original Omnipressor, so going into using this plug-in I didn't have any prior knowledge of the make up of the Omnipressor. However, the parameters available on the Omnipressor Plug-in are ubiquitous for compressors, as it has knobs for threshold, attack time, release time, function, which is basically either your compression ratio or expansion, and for both attenuation limit and gain limit. It also has a series of buttons, including for input calibration (between -10 db and -20 db), bass cut/bass normal, output calibration (between +10 db and +20 db), and for choosing what you view in terms of metering. A manual isn't necessary, but could be helpful for new users.

I'm not running the Eventide Omnipressor Plug-in on my own system, but at the professional studio that I used the plug-in at, it was running on a Pro Tools HD system with a Digidesign 192 I/O interface and Apogee converters. The computer that I ran it on was an Apple Mac G5 desktop. If you're running an HD system with the Omnipressor, you will most likely have no trouble running it, but it is hard to say for sure without actually running it...

For a plug-in, the Eventide Omnipressor Plug-in has a pretty great tone. It isn't my favorite compressor plug-in, but it does have the ability to get some sounds that you can't get from a normal compressor, which is pretty cool. It can be used both as a traditional compressor, as well as an expander, and is capable of getting sounds in between as well. Unfortunately, for those of you who might want the Omnipressor plug-in on it's own, it can only be found in the Eventide Anthology II bundle. However, I would recommend checking out the bundle anyway, as it is overall a great bundle with a ton of other plug-ins worth checking out as well...
Did you find this review helpful?yesno