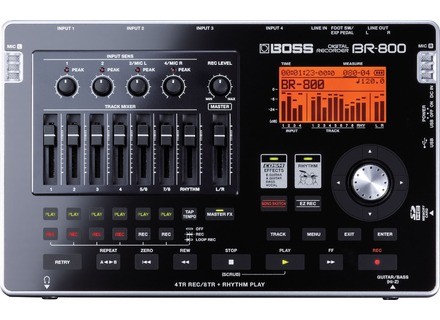 Buy this productView price information >
View other reviews for this product:
You can find this box a little smaller than an A4 sheet connectors fairly complete: 4 input jack and XLR input + mini jack for connecting an external source. A jack for a footswitch, an RCA output. No MIDI.
On the side are taken to plug the AC adapter and USB input (which can power the unit).
In front, there is a 6.35 high impedance jack for connecting guitars and bass and a headphone output (also 6.35)

The sampling is done 44100Hz Stereo, but in a format it is necessary to convert the supplied software to be able to read on a computer.

Data storage is on SD card (SDHC compatible)
This unit can record up to 4 tracks and read 8 (4 mono + 2 stereo) simultaneously.

It is also possible to register with embedded microphones, and a number of presets (editable) are available to fit depending on the source, but do not expect miracles, it is a decision- its really mean that you get with these microphones.
Level

use for a regular, it quickly finds its mark, there is a little browsing through the menus, but some keys act as "shortcuts", and it is rather well done in the together.

The manual is very complete, that in my case it was provided in English on paper, but it can be found on the CD-ROM and on-site boss.
Editing sounds is actually pretty good effects, the big screen is fairly explicit, a dial to select the values and navigate through parameters.

Sound level, nothing wrong, it is rather good, the effects are the famous COSM effects, and are from the Boss GT-8, we can reconstruct all kinds of sounds with this device. I blame him just a little too distos pushed to the factory presets, but it is easily corrected by editing the sounds.

The sounds of the drum machine are sufficient to model, but it is quickly limited if one wants to further diversify.

Note that the device has a function "looper" good practice, it can also simulate a bass or an acoustic guitar from an electric guitar. For the bass sounds is quite impressive if however, do not try to play chords (!), However, for acoustic simulations, it is not really convincing.

There are also effects for the voice, the factory presets are pretty well done (harmonies, dubbing vocoder ...) it's a little more, not of exceptional quality, but it does its job and that to the deserves to be there.

I use this unit for about a month, used the Micro BR, I'm not homesick, and the interface saves time and ergonomics.

However there are some things to regret: we lose a lot of use "nomadic" because you need a computer to encode the file (only wav, and only with the supplied software), because the device does not itself.

For the beatbox ago arranger for editing rhythms by combining different reasons and it would require however a computer to edit the grounds themselves, using the supplied software.

The big downside for me is the touch screen of this unit by the time certain keys refuse to answer, and they no longer work until the extinction / reignition of the device is really hard sometimes, and similarly, the directional buttons located around the wheel are very sensitive, it is not uncommon to touch by turning the knob, which tends to change a setting other than that which was being edited.

At 400 €, I believe the toy a bit expensive, but it's still good stuff. I bought it more or less on a whim without really trying, so if you are potentially interested, I really recommend trying it before buying.

I do not know if I will ever this election, but it's something all-in-one that has no real competition, then ....
See the source
Did you find this review helpful?yesno
Cookies help us improve performance, enhance user experience and deliver our services. By using our services, you agree to our use of cookies. Find out more.