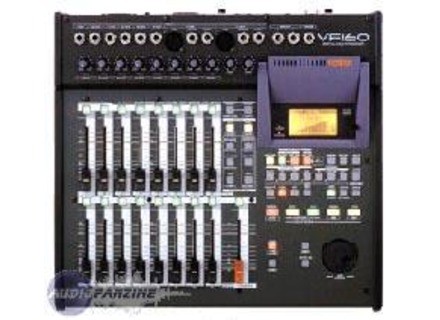 View other reviews for this product:
Ebay - $690

If, like me, you've recorded for years on a cassette four-track, or occasionally on big tape in a real studio, and you feel like you're outgrowing the 4-track but not yet ready to start knocking out walls in your house or investing thousands of dollars in a truly serious recording rig, then this is the unit for you. I could very easily have gone into a more complex computer recording situation but (a) I move around a lot and (b) I come from a very "analog" and 4-track/ guitar player background, with lots of live playing (no MIDI or sequencing etc.) and for that kind of person, this is a real step up in the right direction! The great thing about this unit is that, unlike recording with a home computer setup, I can take the unit and a few microphones wherever the drum kit (or backup singers, or vibraphone, etc.) is set up and just plug it in and rock, on location. Some of the operating features are a little obscure (there is some jogging through menus, and there is definitely more reading the manual involved than with a conventional 4-track, but if you have patience and the desire, the improvements are sooo worth it, it's incredible. I recorded a "test recording" one instrument at a time, and I must say it took me almost a week's worth of evenings to get the first recording finished and sounding right, as I was learning the features of the VF-160 and how to get good sounds as I went. So I don't think it's a "plug and play" kind of thing where you'll record a masterpiece in an hour after you take it out of the box.

This is a pretty complex recorder, it's not 100% simple, there's lots of scrolling and hitting keys in a certain sequence to get it to do what you want. For me, there was A LOT of reading the manual involved. I've only had it a few months, but I've found that the effort and extra work involved generally pays off. For instance, at first I had a real hard time getting a good bass guitar sound, or getting a really good mixdown, but by reading the manual and boning up and paying attention I got much better sounds pretty quickly. It's not as spontaneous as a 4-track, you do have to work and think a bit about what you're doing. There is a little bit of brittleness to the overall sound, sometimes I miss that feeling of "tape" where instruments start bleeding together and you reach a point where it all sounds good. But the editing features, punching in and stuff is just priceless. You don't like the punch-in guitar solo you just did? Just hit "undo" and it's forgotten. Can't do that with analog. I know to a lot of people that's old hat, but to a die-hard 4-tracker, it's very cool!

Seems to be well-constructed. The CD burner seems rather flimsy, though. When it ejects it just kind of spits the tray out, it's not very smooth. The whole unit itself is pretty solidly built, comparable to an older 4-track. The faders are very finger-friendly -- you can move them around very smoothly and organically (like on fade-outs) unlike many four-track recorders out there.

Awesome step up for somebody who is beyond a 4-track but not ready for a whole-hog Protools or Digi001 type rig. A solo recording person will never run out of tracks on this thing. A person who does most of their work on a computer could probably find a better tool, but for a guitar-player/keyboard player/singer like me, it's perfect.