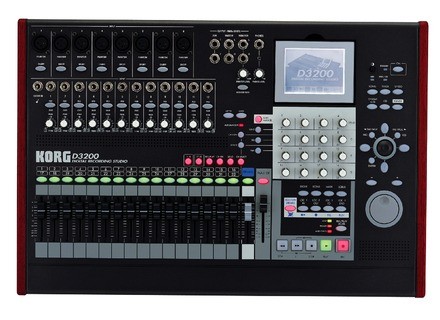 View other reviews for this product:
Before anything else, I have enjoyed, I sold it.
8 XLR inputs and phantom power jack, jack stereo pairs + 2 + digital input.
Provided midi in / out, works with MAC.
Save 16 or 24 bits (in this case 16 playback tracks max)
HDD recording 40 ° G
You can record 8 tracks at least ...

The great strength of the unit is to have the sliders on hand. An interface 16 buttons adjusts easily. The manual is very clear. POINT BLACK SCREEN is N / B, and small obsolete today. However, the details are there.

IN the sound, it is quite correct. It will not shake the walls by its dynamics, but is quite transparent. The effects are good, except those for guitar, to forget.

I used the D3200 for 8 years. It has never failed me, no bugs, nothing!
In 2005, he had no equivalent, it was the low end, or we had to double the price to get better. At the time I did not want repndre my head with the ordo-soundcard-software ... But times have changed.
The most significant is that if you have an idea, it lights up, you plug pressing REC and go.
If you want to make chiadés mix, it is also possible, but more tedious than on a computer.
The value used ratio (500) is very correct because it has 8 tracks XLR at the same time ...
I have never regretted buying this camera, I'm just past the computer in early 2013.
See the source
Did you find this review helpful?yesno
Cookies help us improve performance, enhance user experience and deliver our services. By using our services, you agree to our use of cookies. Find out more.