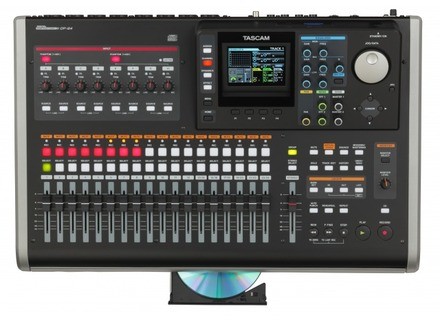 View other reviews for this product:
The TASCAM DP 24 is a digital studio with 24 tracks. It may seem like a larger unit, but it really is pretty small and compact which is the reason that I purchase it. Being that it was a 24 track studio that was portable was something that I thought highly off and wanted to have it right away. I also had a custom soft case made for it jus to protect it when it is not being used or transported. There is a semi large LCD screen on it that lets you look at the tracks like you would in a DAW on your computer. The screen is nowhere near as big as a computer screen but it is not bad considering the price of this unit and the size of it.

There are only two mix down effects on this unit and they are reverb and chorus but they worked just fine for me. There is a built in CD drive that you can burn right to a CD from after you record a track, or you can use it for back up too. The DP 24 has a chromatic tuner and metronome built into it with MIDI input/output to sync your clocks with other gear.

The total weight of this unit is no heavier than 15 pounds and it records and stores information on a SD card. It can take SD cards up to 32 GB. Just about everything you could ever need is on this portable studio, about the only thing that I was not a fan of what the effects section which is very thin. But you can also track out and use effects from other gear or in Pro Tools and where ever you do your final masters at.

I mainly only use this studio just to do some small on the road stuff with but everything always makes its way back into Pro Tools for me, I love how I can just burn everything right a CD and later just put the CD in my computer to get my files.
Did you find this review helpful?yesno