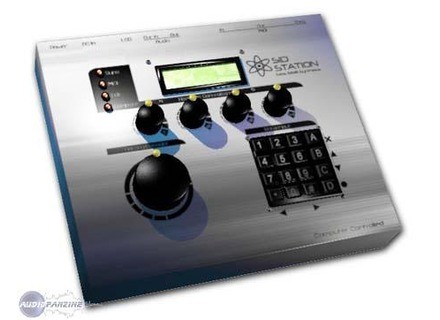 View other reviews for this product:
Small gray box well freindly
control everything in 2 hours .. playfully understands the internal parameters
bone can be unstable depending on the number of simultaneous MIDI notes and tends to flash / ...on / off is off again ca

is a sidstation, bone Commodore c64 is like that (nothing very bad)
must know that between one version "do it yourself" version of elektron is overclocked .. and its a nostalgia sidstation 82

a purchase only if we understand that the goal was to return to elektron mind 82.83 and reboost the sid ... follower of Micromuse / cheaptunes...bienvenue in Wonderland

Simple Config
nothing to do with QuadraSID ... it has the magic bullet that squeeze on some ground gives emotions very electronic

Besides the vostok it has its place, the squeeze brings the freshness ... ideal for electro

it's something crazy, she made the best 8 bits (as in 44khz/16bits convertos elektron) its semi analog / digital semi ... dynamics, really nothing to do with bits of soft drinks in 96kHz/24

here is less fine, many + random, it stains, and this is requested, the trp freeware are clean and simplistic a side (as a wavetable sequencer powwwa!)

Sounds interesting ..
I personally tested the presets (4) and finally I went back to zero
well almost sometimes I use the ninja but nothing worth while to rebuild

sidstation behind the filter is filtered xpass, I did not put noize gate

The - it can bugger but nothing catastrophic (on / off and AC off again on the same preset, parameter etc. ..
somewhat limited at the beginning (that is an impression because after the AC is absolutely more)

Most everything else
ergonomics, design, strength of the machine, have everything at hand
the peps
before long I receive my second sid, I'm in love, nothing to do with VSTS

with an aim quadsid, given that the argus DECOTE you can go for .. there's nothing better
etc. .. unlike its price is largely justified, nothing to do with competition
after is a matter of taste .. It does not sound like a Moog Voyager sure,

but it is not the purpose of the squeeze that has a presence rather alternative
See the source
Did you find this review helpful?yesno