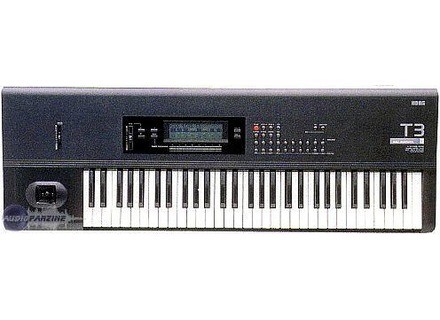 View other reviews for this product:
CHARACTERISTICS of allchantes even today.
-> Keyboard high quality at significantly suprieur Triton LE, with good dynamics and a good back after touch is identical to the trinity.
-> A 8-track squenceur certainly a little but it has the Exceeds MRIT to exist.
-> A floppy disk drive for backup squence and sounds.
-> A large screen bright enough, the same version as 01W (01W on he pricks soft T?).
-> A polyphony of 16 notes is enough but not too load sheet.
-> Two sries of MIDI.
Face of a killer, yet short on time!

Operation is intuitive and easy. Really saying anything, PROG, COMBI, SEQ everything described above and comprhensible. The Korg M1 and T-series are not part of synths for the synthses melted, but there is plenty to enjoy. The filters are not rsons but there are beautiful waveforms.
We can dub sounds of M1

Sounds have biensur ages. The pianos are dpasss, guitars fairly average, organs also took a slap ... but the standards are low, round, warm, the sax is great, it yammer a sax gnial saturated, the strings are a bit analogue but precisely, they are superb as the correct way trs, the drums are average but what EHJV! it is monstrous. Not really a synthesis of PCHE. The grave is well Submitted!

On the set of origin, the bank prog A is identical to M1, and you can even take the M1 sysex banks and put them in the T3. I do not have M1, I do not know how it sounds, but the T3 is really good.

This synth has the mouth, it is beautiful, it has everything you are looking today.

Thanks to the sounds of the M1, we can support thousands of sounds.

The keyboard and screen are its strengths indniables. Well it is a bit heavy, Maisnie precisely it can be used in keypad.
Voil
See the source
Did you find this review helpful?yesno
Cookies help us improve performance, enhance user experience and deliver our services. By using our services, you agree to our use of cookies. Find out more.