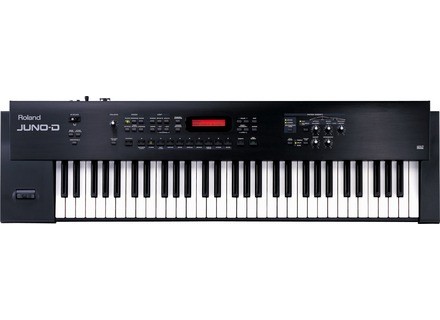 JUNO-D, Digital Synth from Roland in the Juno series.

View other reviews for this product:
Looking for a last-minute ticket to spend a few days across seas, my eye felt on flyer of some musicstore in Amsterdam. They sold the Roland for € 300,- as a bargan sale. Knowing I could keep the keyboard/synth for years, still enjoying the sounds of my old Roland E36, and travelling for a living most of the time, I called my brother and asked him if he would be so nice to come over. He lives in Amsterdam so I told him to go by the musicstore before heading my way.

No trip to the United States or Southern Europe, but a nice new soundmodule for me that summer.

It has nice sounding presets, also for dancemusic. It has the legendairy 808 and 909 kits, which are like all other sounds editable, by MIDI, included pc editor of right away on the toy itself (but you need to know your way to make quick edits).

For today you could say there are not enough programmable knobs on the surface, but then again, it's a instrument before t-screen.

The effects are good, but you can use just one at the time, good enough for studio, lesser for live (if you don't have on outboard fx-rack that is!).

About the beatbox... never use it. Never tried but just a few hits. I got cooler toys for that.

display is a bit small

The presets are good enough to get the sound you are looking for by just tweaking a little. You just need to learn the sounds.

But for a beginner it could feel like just not the bomb,
once familiar with MIDI and it's potentials, this Roland does the trick.

I also have a V-drum by Roland and again, it could not sound more pro then that in my ears. Remember, there sound you hear at home is a combination of all routed hardware. But the Roland part is quality sound, it a pro brand and the sound you hear a lot in the media.

I like the sounds using a external reverb and for the recording touch off course some sort of eq to ballans it in the mix.

It is a keyboard with the MIDI capability to make it way better then a synth played by some-one that does not reaches the big budget-synth potentials.
It's way better that low budget old time synths.

As a drummodule, it rocks!
All dancetracks can be made on this babe, but you need skills, for that's how big boys use this kind of toys!
Did you find this review helpful?yesno