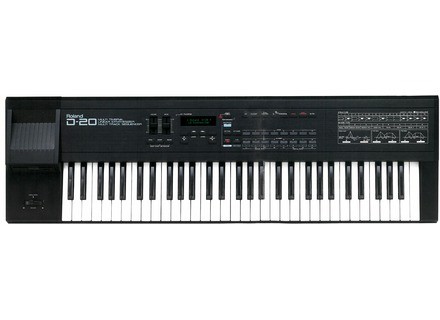 Ah! Nostalgia when you hold us ...

I will not dwell on technical aspects of the d20 so they are known and described here and there. In fact I think just intended to write a few lines on what was my first real synth. Now some will say it is outdated, that the sounds are ugly, it's breath, etc.. All this is true, but hey, a few treatments and the breath disappears, as the sounds, the D20 has enormous potential for editions that ultimately have little to envy the current synths. The realism of the sounds is not on the agenda, but they can bring a personal touch is between the "big" analog sounds, and sounds more neutral and the Triton consors. It is ultimately a question of balance and number of composition would benefit from a D20 to the extent that for once we hear a different sound ...

The sequencer is now ridiculous modes menus, submenus, sub-sub menus, etc.. accessible by a single button, are boring to be, but in the 90's and it was so good and it was not until the release of JD800 to feel that the trend was reversed.

I sold mine in 93, I still do not know why, and suddenly, I found one for 150 € and even if it is more a quirk than a real need, I do not regret my purchase because I know I will use it soon even though initially it will serve as master control I will emphasize to the sounds outside the box ...

D20 I love you
See the source
Did you find this review helpful?yesno
Cookies help us improve performance, enhance user experience and deliver our services. By using our services, you agree to our use of cookies. Find out more.