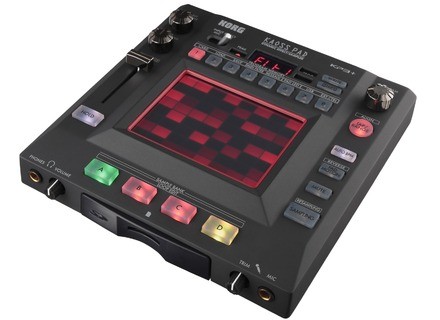 The Kaoss Pad KP3+ offers the original KP3 effects, sounds and features, plus 22 all-new, diverse effect programs for everything from various EDM genres to rock and beyond, and complemented by an enhanced pad illumination system.

The KP3+ features a total of 150 effects programs. In addition to the selection of filters, decimators, vocoders and similar effects, user favorites have been added from the Kaoss Pad Quad and Mini Kaoss Pad 2: the Looper, a Ducking Compressor which adds emphasis to the backbeats and a Vinyl Break effect that simulates the slowing down of a turntable. All-new effects are also included, which were designed to create breaks and drops or to partially cancel vocal parts, as well as combination effects such as Stutter Grain, which alternately applies a grain shifter and a Looper.

Like all Kaoss Pads, the KP3+ responds to the touch of a finger on its X/Y pad, for real-time control over multiple parameters. A Pad Motion feature memorizes and repeats any pad gesture, and the Hold button locks the fingers current position on the pad. To prevent abrupt changes when transitioning between effects, the FX Release function adds an adjustable delay tail when the user's finger is removed from the X/Y pad.

The pad lighting system - 64 individual LEDs- illuminates along the path that's traced by the user's finger, providing a real-time light show, as well as enabling the user to easily perform in dimly lit environments. For sampling, a new illumination system has been employed: the four sampling bank LEDs now light up red during recording and green during playback.

The KP3+ offers a sampling feature from a wide variety of sources via mic and line inputs. Four Sample Bank buttons (100 total banks) allow the user to create, play and save looped and one-shot samples on the fly. Dedicated sampling features include auto-BPM detection and Tap-Tempo entry, plus Time-Slicing and re-sampling. Samples can be saved on a Secure Digital (SD) card or transferred to computer via USB.

The KP3+ is also a MIDI controller, transmitting three controller signals from its touchpad, along with data from the slider. The Sample Bank buttons send and receive MIDI note messages as well as program change commands and clock information.

USB computer connectivity allows for data transfer to a computer. The included editor/librarian software also enables AIFF and WAV audio files to be loaded into the KP3+.