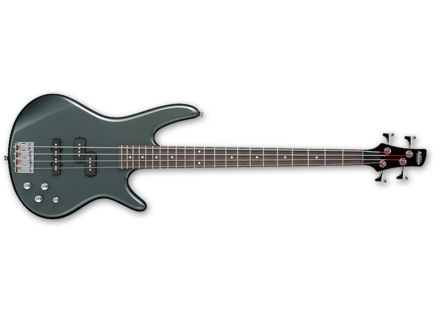 Buy this productView price information >
View other reviews for this product:
Made in Indonesia.
The model I have is exactly the same but passive version.
Late innings, 21 frets (in my memory anyway).
A typical JB and PB-type microphone. 3 knobs (1 volume and 2 tone).
Agathis body.

Good as in the previous review I will say that this is a good bass study, fairly light, well balanced weight side but not its side (indeed some strings, regardless of the settings, did not sound as strong as the other , Charles will know ...). I said that the welds are between the knobs and pickups have dropped (besides what's funny is that I had bought in a beginner pack and all accessories which accompanied it all ended I quickly snapped between the legs, Conclusion No. 1: If you think getting a good deal by buying the complete package, you make a huge mistake ...).
I frankly never understood the logic of setting the knobs anyway? Let me explain: Basically when we have 3 knobs on a low (maybe wrong I) and there is only one volume knob and that the decline is not fully supposed to have no sound? Well no! Ibanez they are launching a new concept: two knobs down randomly at the same time to mute frankly ... then I say ... RESPECT! We had never done anything so strange and impractical before!
Conclusion # 2: The guys who designed this model are either sadistic or completely stupid!

When I bought it was sufficient in relation to my expectations because I just wanted to get a sound that approximates or indirectly to a bass sound. I got back into the hands recently for a short time and it still does not sound too bad. It is fairly accurate in the sounds it out.

Well not mine it's been almost 10 years that I have and despite the repairs to the electronics it has at no point moved. I did not really proven useful at the time to test other models because I had no knowledge of the subject, I just wanted a low (good or bad). Well it's not so bad but not enough to be kept as long as the lack of balance in his (the gear supplied in the pack that snaps at a phenomenal rate), and the electronics fail, excluding the varnish handle that as and when the time disappeared (there are still ^ ^) I thought that ultimately I would have done better not buy a bass with 50-100 € more.
I finally fourguée my guitarist who was happy to have a low end in the hands (like most guitarists I know for that matter) at the end everyone was happy.

Final conclusion: If you really want to enjoy a unique instrument you want to play rockstar burst of rage your instrument on the ground do not buy this bass, add 100 € more, buy a little amp beside occasion you will surely printing lose less money.
See the source
Did you find this review helpful?yesno
Cookies help us improve performance, enhance user experience and deliver our services. By using our services, you agree to our use of cookies. Find out more.