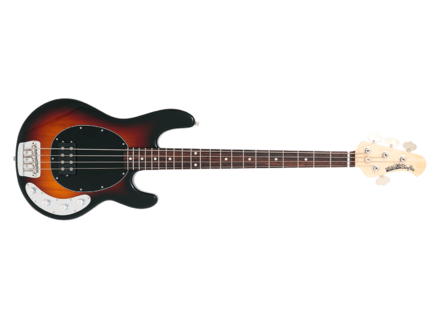 View other reviews for this product:
This is a United States, with the original microphone, the rosewood fingerboard on a maple neck, active electronics with volume four buttons, acute, medium and severe

It is heavy but well balanced, not tiring.
The settings of the active electronics provide a stunning variety of sounds, especially since there is only one microphone!
The in-game settings are facilitated by the existence of a "notch" in the middle of the rotation of the potentiometers.
Fast enough, we identify two or three sounds you need, and can be found easily.
For example:
- "Big sound" all settings to half;
- "Cool jazz": acute and medium at 0, severe back
- "Jazzy solo" half acute, severe back
- To be heard without touching the volume control, just get a bit of medium ... etc ...

Everything we can play with this bass. You're in luck: my group is very eclectic in a style sometimes rock, sometimes jazz, with gentle ballads and classic rock pulse.
I play without effects box, sometimes connected directly to the sound, sometimes with a little amp Peavey Basic 40 (an ancient, but strong, that sounds good).

I have three years.
I'm also a Welson (an ancient Italian!), The Fender Jazz Bass (Mexican and United States one) and a German clone (Hohner) Fender precision bass and an Ibanez which I forgot the model accurate.
It is at least as good as the Fender Jazz Bass States and significantly outperforms all others.
It is a low rather expensive. I bought mine used in 1100 euros, nine state really, and I think I've done a great deal for my pleasure to play.
It is perfect agreement: the provision of the fourth key is a bit confusing at first.
The strings I have, and I did not need to change in three years, have a defect: their thread is a little hard on the fingers of both hands, in the long run. I will find out if there is something less abrasive, without falling flat in the thread ...
If I had to change it (except for theft or fire, I do not see what might happen to him, it is rock solid!), I would buy the same or I am tempted by the new model, which aesthetics is less original but, as a result, more discreet than I with his "pickguard" egg-shaped black on the body in light beech veined.
See the source
Did you find this review helpful?yesno
Cookies help us improve performance, enhance user experience and deliver our services. By using our services, you agree to our use of cookies. Find out more.