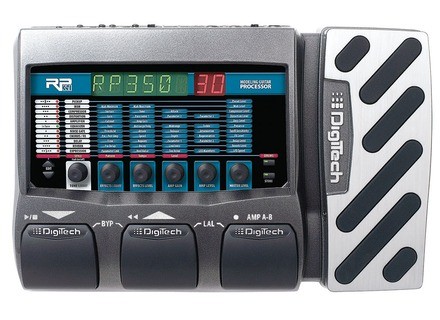 RP350, Multi-Effects for Electric Guitar from DigiTech in the RP series.

The inclusion of Cubase software enhances the RP350's capabilities; Via the RP350's USB connection, guitars can be recorded directly to PC or Mac, then captured and edited using Cubase LE4's 48-track DAW. As an added bonus, Cubase LE4 features VST soft-synth instruments, such as drums. This combination is designed to let you arrange, record and produce music in one package. The RP350 features over 118 amplifiers, cabinets, effects and stompboxes. Housed in a die-cast metal chassis, the RP350 features a built-in expression pedal to control wahs, volume and other effect parameters. The RP350 can also be edited from PC or Mac using the included DigiTech X-Edit editing software.

For more information, visit their web site at www.digitech.com.