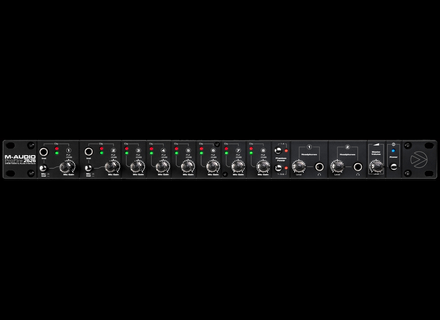 ProFire 2626, FireWire audio interface from M-Audio in the Profire series.

View other reviews for this product:
Last Updated February 29, 2012

-First, it is available in 8 audio inputs XLR and 1/4 and its 8 outputs 1/4.
Then-is that it connects with Firewire, so it&#39;s more reliable than USB!
The eight-audio outputs can be assigned to virtual instruments.
-The possibility of two connected sets in!
-Ability to record at 192 kHz


What instruments or systems (console, preamp, DtDs ...) the use and how you connect?

I use it with a Behringer Eurorack mixer 12 inputs. To which the instruments, I use it with an electric guitar, keyboard Technic SCS.1m dj mixer, a Korg synthesizer Er mkii microphones and m-audio.

to which is the connectivity;

I use almost exclusively of XLR cable. I love the fact that he provided a cable fulfilled.
I use for output of a snake cable 8 1/4 TRS or TS (I have both) for connected to my Behringer Eurorack Mixer.

I&#39;m recording in the studio and the fact that it is not too big I can go directly from recording musicians! I recorded of the guitarists, bassists of, pianist, singer / vocalist,

I also use it as a soundcard for DJing, then the 8 audio outputs are proving to be very helpful.
Especially because it has quality output compared to the sound card made for DJing that only has RCA output! The one with the output and input XLR or 1/4 are so expensive, often on top of $ 1,000.00.

When I connect Mix all outputs to input my Behringer mixer EQs and control is better than a dj program.

The drivers are stable? They are often updated

The drivers are very stable I have ever dropped.
They are made-to-day from time to time ... I could remember the last time!

What software do you use most often?

sometimes if I use


What you get lag?

I&#39;ve never touched it because I have never failed!


How many tracks do you manage to record / play simultaneously?

I never try more than 8 tracks.

yes enough for a basic registration. Otherwise there has read the manual (a little flies only) to understand all the functionality of the DSP mixer if you&#39;re not familiar with sound equipment.
Incidentally, the mixer (mixer) DSP is so useful once you understand how it works!


Have you encountered any incompatibilities?

yes with Sony Sound Forge to record if not for reading it is ok.


The manual is clear and sufficient?

yes the manual is very good and explains very well the operation of the machine.


Bémole one! Is having to close or have the computer on standby and to connect it but otherwise everything is great!

I&#39;ve had a year soon and it never fails me.
either physically or computationally!

And unlike many other reviews I read, none of my knobs did ramolit or broken.


Did you tried many other models before buying it?

but not all the sound engineers I know and sound technician offered me this one. So I rent one for a week then I realized it was excellant for the price offered.

What is so special that you love the most, least?
The +:
my much: its standalone operation.

- It&#39;s duty to have the computer shut down or on standby and to connect it to the computer.

Excelling, having shopped for a year sound cards on the web and on forums is that which was given the best performance for its price and features.

I am told that even if it&#39;s more than looking cards with only 2 or 3 audio inputs, it&#39;s worth it because it does not crash very rarely if ever! (At least we are trying to do obviously planted!)