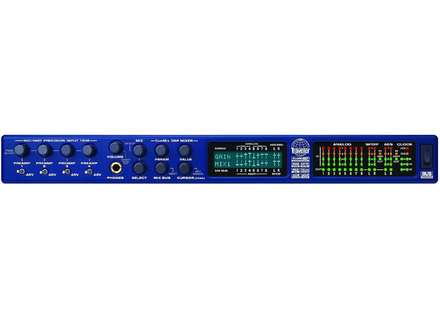 Traveler, FireWire audio interface from MOTU in the Traveler series.

Product replaced by the MOTU Traveler-mk3.

View other reviews for this product:
My usage: acoustic recordings (backing vocals, string ensemble, orchestra) and mixing in a amateur.
I needed more than 2 preamps with 48v power supply, something portable (no rack), and very good (between Motu and RME so) to connect to a Laptop (USB or FireWire). MIDI to VSTi, possible extensions for future preamps.

No problem on the Dell but not on my old HP Pavilion with Athlon 1.2 because of the FireWire, I tried two cards FW without success. So I changed the PC and there everything is going well. It is useful to check the compatibility of the Firewire stuff (the site of Motu)

I put 10 still becaufe if the PC were real PC (compatible what!) There shall have not all these problems, Motu has nothing to do with all that.

Hyper-stable drivers. You can plug / unplug, turn on / off, reboot in all directions, the map is still there, although detected at first. In use, no crash, even when it explodes the CPU load or RAM, the card does not move, it's really pro. 4ms latency surprising given the number of I / O and FireWire 400 connectors. I bleufé, CPU consumption of this card is lower than my old Edirol DA2496 PCI yet. Motu drivers are the main strength of this card (and probably MOTU in general).

I use the card with all sorts of software including Cubase SX3 and a bunch of Plugin Vst Dx or.

I use it for 1 year. Here is my opinion:

At 1-unpacking: the card is very very light (thus portable) but suddenly frankly not strong (so portable, but with tweezers). The finish is really not to go very far behind the robust Edirol DA2496, FA66, Yamaha I-88X, RME FW etc ... The proof is activated when the knobs / switch, the LCD sinks, all the connections seem welded to the same circuit, the jack is not centered in front of the holes, the external power supply with its ridiculous over no more thicker than a hair short, not really pro.

2-But that's the only complaint as of everything else, the Traveler is a bomb. For starters, it is truly portable, it can enter the bag from the PC. and yet it alone is all I needed the studio:

- The preamps (4) high quality with an unbelievable headroom and no breath. The sound is superb, I record the classic yet (so many players away from the microphones) and the sound is nevertheless a clarity and precision, I believe it.
- A mixer stand alone analog / digital inputs and outputs over 20 can mix any type of signal in all frequencies and voltages in a sound and transparent total independence from the PC.
- A high-end sound card for the PC, a preamp for the video or Stereo without turning on the PC
- Midi Interface
- A headphone listens very well made, I find the clarity, the micro-information, reverbs that I could hear on my CD player Micromega Premium.
- The possibility of extension that left wondering!

3-What I did not expect: more possible to switch from stand alone so it's convenient, it completely replaces a real mixer. The small knobs on the front end are strong practice with a setting in decibels almost incredible precision when you have big fingers I have!

Short but good especially with the stability and low latency that turns my unstable environment in a portable studio PRO Hardware and carefree.

I finally selected the RME FW800 depands for three reasons: Because less expensive, very portable, and obviously the best drivers (less cpu intensive) RME many fans were disappointed by the greed of over FW800 to their old RME PCI or PCMCIA.

I had used € 750, you can probably negotiate below now. For an amateur like me is a luxury, but what a joy for music.
See the source
Did you find this review helpful?yesno
Cookies help us improve performance, enhance user experience and deliver our services. By using our services, you agree to our use of cookies. Find out more.