Today we'll talk about a delicate — but very useful — subject, namely the firewalls that can help you avoid being yet another victim of the loudness war.

In that sense, we'll discuss the K-System and the EBU R128 recommendation without getting too technical about it. Do note that all the plug-ins mentioned in the previous article allow you to use one or the other, or even both of them.

The K-System is a scale system developed by the great Bob Katz, who's as good a mastering engineer as they come. The goal of the K-System is to help you preserve the dynamics of your music. To achieve that, Bob Katz created three scales: K-20, K-14 and K-12. Each one is aimed at specific types of music. K-20 is intended for classical and "audiophile" recordings, K-14 is for "modern" music (rock, pop, etc.) K-12 is for broadcast.

The principle is the same for all three scales and it consists in the shifting of the 0dB reference point. Thus, for the K-14 scale, for example, 0dB equals -14dBFS. That way, if you master while keeping an average level of 0 VU on the K-14 scale with peaks reaching +14, you'll have a song that has an effective 14dB dynamic range.

The use of the K-System is a very good way to avoid the abuse of compression during mastering. If you want to learn more about the K-System, we invite you to read this excellent article by Mr. Katz. 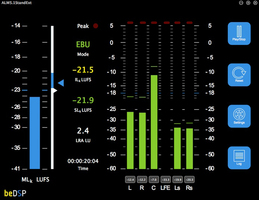 Behind this barbaric name is the latest recommendation of the EBU (European Broadcast Union), which is in the process of becoming the ultimate solution to the vicious loudness war that has been raging for quite some time, claiming many ears. Without going into the (many) details inherent to EBU R128 (in the US, broadcasters must adhere to a similar loudness standard called ATSC A/85), it's important to know that it's a means to measure, and thus harmonize, the perceived volume. And since the major players in the industry (Spotify, iTunes Radio, as well as many TV stations, to name but a few) comply to it, it seems very wise to take it seriously. In fact, a song that doesn't comply to this norm will sound "muddled," lifeless, even without punch, in comparison to another one that does when listening to them through a system that complies strictly to the EBU R128.

Fortunately for us, there are many plug-ins that allow you to work with this recommendation. These plug-ins display levels according to two new unities created by the EBU just for the occasion: The LU, which stands for "Loudness Unit," and LUFS, which stands for "Loudness Units referenced to Full Scale." Thus, the perceived volume is displayed either referenced to an absolute (LUFS) or a relative (LU) scale. Within a software that complies to the "EBU mode," 0 LU corresponds to -23 LUFS, which is the Target Level.

Unfortunately we don't have enough space here to describe the EBU R128 recommendation in detail. However, you can read the recommendation directly at the EBU website.