In this installment we'll talk about plug-ins that allow you to visualize levels correctly — after all, whether you like it or not, mastering has become synonymous with volume, so it's a good idea to have quality tools to analyze what's going on in that respect.

Just for a change, we'll start by naming some plug-ins capable of helping you out when it comes to objectively assessing the volume of your songs:

What are they for?

As you can see if you take a look at the plug-ins above, audio metering tools offer different means to visualize volume variations in music. Thus, you can find peak meters, RMS levels, EBU, etc. But, what's their use you ask? Well, they can be very useful in different mastering situations, as we are about to see. 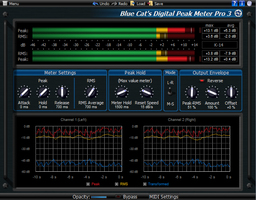 First of all, plug-ins of this sort are usually much more precise than the level meters of your DAW. So, placed at the end of the chain, they will allow you to avoid digital distortion by making sure that you never exceed the sacred 0 dBFS limit.

They also offer you the possibility to be aware of the dynamics of a song in an objective fashion. To do that, you only need to look at the difference between the peaks and mean values (RMS). The smaller the difference, the more compressed is the music. Some plug-ins do that calculation for you, and some even display a bar graph with this value, so you can follow the evolution of the dynamics throughout the entire song.

This type of plug-in is also useful to strike a balance between the unmastered and the mastered files in terms of level. By placing an instance of the plug-in at the beginning of the chain and another one at the end, followed by a gain adjustment plug-in (like Blue Cat’s Gain Suite, which is freeware), it is really easy to adjust the levels, so that listening to a track with and without mastering yields the same impression in terms of loudness. This will allow you to easily grasp the impact of your mastering without being biased by the "louder is better" effect. But make sure to remove the gain adjustment plug-in before you export your final master, to recover the optimal sound level. Note, as well, that this technique can also be used to compare your track with a commercial song at equal levels.

Finally, some of these plug-ins allow you to comply with tried-and-true systems when it comes to fighting the "Loudness War," like the K-System or even the European Broadcast Union's (EBU) loudness recommendations. But we will talk about that in detail next time...