In mastering, EQing could be your best friend or your worst enemy. Which of the two depends on your grasp of the word: subtlety!

What is the EQ for?

EQ is used to provide some coloration and tonal balance in the mastering stage. And that obviously relates to the song your are working on at the moment. However, you need to always keep the bigger picture in mind, so that every song naturally finds its place in the album, and passing from one song to the next isn't shocking to the listener. The song your are mastering is part of a whole and EQing is the building block of its sonic coherence.

A matter of choice

Before you start, you need to consider two things: What type of EQ you'll use and where will you place it in the signal chain? Regarding the former, there are basically two EQ families, "transparent" EQs and "coloring" ones, both in software and hardware. Depending on what you want to achieve, your choice will be between one or the other.

As a general rule of thumb, a transparent EQ is more appropriate to cut certain frequencies, while a coloring EQ will be better to boost here and there. When it comes to the question of whether to place the EQ before or after the dynamics processors, the answer is always the same: it depends on what you want to achieve. It's preferable to place the EQ pre-compressor when you cut frequencies and post-compressor when you boost them. But that's not an unbreakable rule and you will often find yourself using two EQs, pre- and post-compressor. Do note, however, that boosting part of the frequency range before compression will result in those same frequencies being processed by the compressor, which might be counterproductive.

We will not go into the details of how an EQ works here. To that end, you should refer to this article. Instead, we'll concentrate on instincts you should have to be able to bring out the best of your music in a natural way. 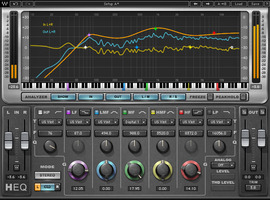 The best way to not mess up a mix with EQing is to always start with a subtractive approach, meaning, it is better to cut some frequencies rather than boost them. Thus, for a song that lacks some "air," it's better to decrease the low mids rather than boost the high end. Once the cleaning is done, if the outcome is still not up to your expectations, you can gently boost some frequencies.

In order for the EQing to be as natural and musical possible, you should use a narrow bandwidth (high Q factor) when you decrease the level and, inversely, you should work with a broad bandwidth (low Q factor) when you increase the level. By the way, +/- 3 dB on a frequency band during mastering is a lot! If you feel the need to exceed this value, there is surely a problem with the mix, so you should try to solve the problem at the source.

Also note that, the broader the bandwidth, the less gain you need. Unless you're working on a single song, always keep in mind the rest of the album. The overall idea you have for the album, and the place the song will have in it, should serve as a guide for the color that the song ought to have.

Finally, during mastering, it is useful to treat the EQ like you would a reverb that you want to sound as natural as possible. Broadly speaking, the EQ should go unnoticed but, at the same time, you should miss it when you take it out. Looking at things this way is an excellent means of protecting yourself against any abusive use of the EQ.

In the next installment, we will deal with the use of the EQ in specific situations within the context of DIY Mastering.

*Click here to view all installments of this multi-part series*