Today we'll deal with frequency masking ─ what is it actually, and how can we solve it?

Frequency masking occurs when two — or more — elements battle over the same frequency zone, which makes it hard to distinguish either one clearly. Masking inevitably happens  with doubled instruments (guitars, vocals, etc.), but not only. If you take a look at a frequency chart, you'll see that many instruments' have overlapping frequencies. If two instruments that share more or less the same frequency range are played at the same time, the odds are high that they will be stepping on each other's feet. And that's without even considering the mess created when they play the same melody in unison!

Fortunately, there are several, more or less effective, strategies to tackle the issue. The first one consists in basically panning the instruments to completely opposite sides. While this might do the trick when listening to a stereo mix, don't forget that it will most definitely not work in mono.

You can also work with depth by combining delays and reverbs, as we will see later on, but, once again, that won't be enough most times.

To do it right, you'll have to resort to EQing and, eventually, use either one of the above techniques to get bolder results.

In order to get around this masking effect, I recommend two different equalization methods. 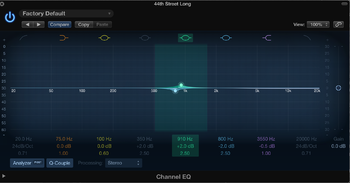 First, let's use a theoretical example to illustrate a typical approach, keeping it simple. Assume you have two guitars playing the same rhythm part. Identify the frequency zone where these guitars are busiest. Let's suppose it's somewhere around 800 Hz. Use a peak filter to barely attenuate that frequency for one of the guitars (I attenuated -2 dB at 800 Hz with a Q of 2.5). Now, add a second peak filter with the same Q and set it to a frequency right above or below the one you just filtered, boosting the exact same amount of dBs you attenuated. In our example, I boosted +2 dB at 920 Hz. Now, do the exact opposite for the other guitar. In our example, that means boosting +2 dB at 800 Hz and attenuating -2 dB at 920 Hz, always with a Q of 2.5. This ought to result in two instruments that work together coherently, without steeping on each other's toes.

The second way to deal with masking is directly derived from the previous one. Once again, you'll have to mirror the boost/attenuation for the tracks involved, but you'll have to choose the frequency differently. This time around, you'll need to find the body (or fullness, what gives it texture) of one of the instruments and the attack of the other. If we were to retake the previous example, we could assume that the fullness of one of the guitars is around 1 kHz and the attack of the other around 4.5 kHz. Now, you'll need to attenuate the attack of the first and boost its texture, and then do the exact opposite for the other one. I prefer this second method because the sensation of separation is not only due to the frequency differences produced, but also to the emphasis put on the role of each of the instruments. In the example we used, one of the guitars will play a more important role in terms of texture, while the other one will provide more rhythmic support.

Next week we'll see how to alter the coloration of a sound with EQ.