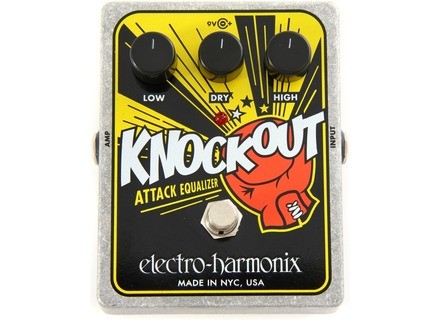 View other reviews for this product:
This is a pretty simple EQ pedal. It has 3 filters, Low, Dry, and High. You can boost or cut any of them however you want. This pedal is supposed to be able to make humbuckers shine like single coils and vice versa. From what I understand it's very simple analog technology that has been around since the 60's. It has an input, output, and a place to plug in a 9V adapter. Fairly simple, and easy to use.

I gave it an 3 because it doesn't do what its supposed to do, but and it doesn't eat the tone when it's off.

It is very easy to use. Each of the filters is very easy to understand. Dry means the original unaffected signal. They could have done more but there's not really anything thats confusing so I gave it an 6.

Here's where the problems lie. The sound. This is the crunchiest pedal ever made. On a guitar its almost useless. It either makes a distorted guitar so crunchy it makes you nauseous, or it makes a clean guitar so crunchy it makes you nauseous. It sounds cool in the first 5 minutes but after that you start to get very annoyed and you end up tossing it in a corner. It will overdrive your tube amp in a second and no matter how much I tweaked everything I couldn't get a real sounding or useful guitar tone. I read that it was supposed to make humbuckers sound like single coils and I thought &quot;Hey, this sounds like a great pedal.&quot; I was wrong. It does not do anything like that.

I tried it on my friends Rickenbacker 4003 through a Fender Bassman and I did get a pretty cool almost wooden tone but it gets old fast. It's almost like Boosty Collins, but due to the limits of this pedal you can't quite get there.

I gave this pedal a 2 because it was thoroughly disappointing.

I am not happy with this pedal. It does not really have a useful sound in it no matter what you use it with. I read about it on musiciansfriend.com and thought it would allow me to get brighter tones but it did not deliver. While I should've known for 60 bucks that it would probably be of poor quality, I expected more from Electro-Harmonix.

I recommend that people avoid this pedal. It's a waste of money and they are worth nothing if you trade them in.

I give it a 2 overall.
Did you find this review helpful?yesno