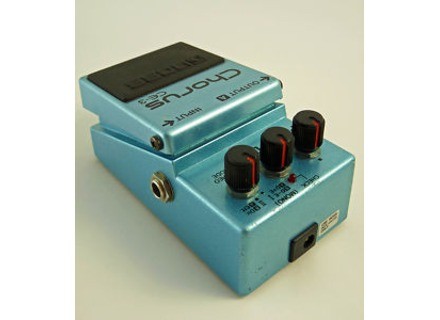 « No real differene that the Taiwan »
5

View other reviews for this product:
This was the third edition to the chorus line from Boss back in the 80's. The reason primarily for this pedal to become produced was the need for two outputs. The CE-2 only has one output and there was a need to run the pedal in stereo, so this pedal was created.

The pedal looks unique in that it has the three knobs level in a row. This is the only 3-knob pedal that has three knobs in a row. This caused the LED light to be hidden and it was a design that was soon changed in favor of the V shaped 3 knob control layout.

Boss finally stopped making these pedals in 1992. The Japan one had two labels. The first being a black label and then the green label which was introduced in 1984. The tone wasn't changed but people will often times sell these claiming the Japan label as there is an allure to get the Japan made ones over the Taiwan. Some pedals suffer d in the transition but not this one.

The sound quality is pretty much the same as the Boss CE-2. The sound quality s pretty much he same as the Taiwan made pedals. The only real change is the output section and the added stereo output. The tone is the same and the EQing of the pedal is the same with simply the rate knob and the depth control knob.You get a nice shimmering watery chorus tone. The liquidity of this pedal is remarkable. It sounds very lush in nature and springs up some nice modulation tone. This is the kind of pedal you use with a nice clean guitar or a distortion amp that you need to add a little bit of beef to.

These pedals have long been gone from production so the used market is the only way to to go at this point. The Japanese version goes for a little more because of the allure to have the first editions. The black label being tom most famous and later moving to the green label.I haven't seen them on the classifieds in quite some time and have no idea what the going rate for them are in this market.

I would recommend this pedal if you can find one at a decent price in the classifieds. They are lush sounding and will add a great amount of depth to your tone.
Did you find this review helpful?yesno