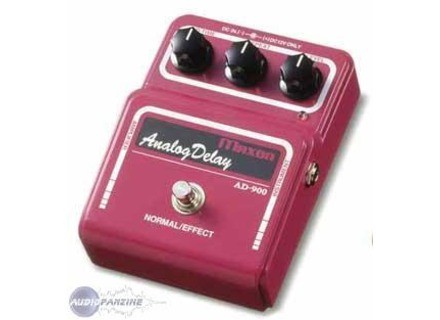 AD-900 Analog Delay, Delay/Echo/Phrase Sampler for Guitar from Maxon in the Vintage series.

View other reviews for this product:
Hello!
I will, for your enjoyment, but also to deceive my boredom when I&#39;m bedridden with too few degrees of body temperature, to introduce a delay that has enchanted me and surprise me (I sell already roving ): The Maxon AD900, vintage analog delay 600mSec.
I&#39;ll tell you what I learned about him after he would have very pleasantly surprised, and even compare it (very quickly) to another delay Instead renamed.
Some general considerations and anecdotes
In line with the AD9 (old version) or AD80, it uses Panasonic BBD chips as popular with fans of analog delays. If I quote a few delays in bulk using this type of chip, you will find that they are not famous for nothing: the Deluxe Memory Man, the Malekko Echo 300 / 600 of the first Boss DM2, the DMB Lunar Echo Diamond Memory Lane ... I believe these chips and the "mojo" that surrounds them well deserve an article just for them.
Returning to the Maxon 900, and finish with the story of chips that I have itchy too, he uses models based on two or four. For those who want to raise prices, the two-chip versions would sound better. For Analogman, if a difference is hardly noticeable, and for those who own both, and were able to compare there is none.
This delay, I bought a little out of spite. I wanted to start an Echo 600 or 300D, but the one I bought has proven HS and irreparable (gas station to crises that make you lose all logic in your purchases, control your impulses!). Finally, I saw an ad on Paris, close to home for the famous AD900 at a good price, and because it was apparently deemed a delay (although I had never heard of) I snapped, wishing at all costs, forgetting the episode of the Echo 600 as soon as possible. I had also had my first decent wage, which helped me to forget all the more logical purchase.

First thing to point out, it works in 12v, and with reversed polarity. I was glad to have everything you need to power my house! It seems that a high voltage would allow more "headroom" to a purpose. I admit that this term puzzles me: I did some research, but I&#39;m not sure how to interpret it. May be more scope and transparency. In any case, the EHX DMM uses 24v for example. And I think the delays as AD80 using 18v 12v convert their circuit (I&#39;m not sure that these details are very interesting, but I have learned this from my reading).
Not really pedalboard-friendly, he has a lot of room, but he adds in against something with its vintage look and its pretty purple.
Do not expect to effect a true bypass, it is not the case and it does not bother at all. This pedal seems to have a good buffer, and I&#39;m not the only one to think one might say.

Let&#39;s talk about more interesting sound: this delay has on one side a little dark, but happens to be very present in a mix. He has a lot of warmth and character, and signal degradation and really beautiful. In terms of self-oscillations: they are all smooth and musical, but it is more difficult to obtain than other delays. It seems that he has the character of the AD80 with a greater delay, and Analogman is a big fan (of 900).

And if you compare?
What is interesting is that I received an Echo 600B meantime, and I could compare the two at once. The 600B is much wilder, and offers more possibilities "noisy", but in terms of quality of delay, the Maxon AD900 seems over. Against it by a little breath that does not interfere with, where the malekko has none. Also, strange for a buffered bypass, we do not hear the "tails" of the echo shuts down when the delay.

Note: Many AD 900 have been modified at the trimpot for a more dirty or more feedaback or self oscillations. Ask the seller what it is for the one he offers.
Otherwise I would like to say that mods exist to put it in true bypass, or for him to add the "tails", or to manage settings with an expression pedal. To see eventually.

Therefore, in conclusion, if you have the opportunity to purchase a great delay, try it before, sometimes it fails.
But no pardon! The real conclusion is that the Maxon AD900 is the best delay I&#39;ve owned and I&#39;ve tried for his warmth, his presence, his dark side so captivating. It lacks may be a hint of madness (which must be obtained by tampering the trimpot BBD chips, but I will not do) when compared to a modern delay Malekko Echo 600B like. But I think it just needs to be supplemented by a digital good in the end.
In terms of delays I have had, for comparison: the Echo 300D (mashed if I had known at the time), the 600B also the Sunny Day Delay, the Blueprint of VFE, a Boss DM2 and some digital ...
In short, if you see an AD900, and are looking for a good delay, think about it, especially it is found at about the same price or cheaper than delays with half the delay time (boss dm2 , maxon AD80) drunken
I almost forgot to mention that Maxon has released the AD999 (normal version and "pro" and having the same aesthetic as the 900), which is also an excellent 900mSec delay with delay time. These are not the same BBD chips, since they are virtually unavailable, but obviously it&#39;s still a success (but pretty expensive, sir). This new delay would be a little less dark, with still a lot of heat (but less), and with a dirtier side (a little less "headroom"?). Voilou!
See the source
Did you find this review helpful?yesno
Cookies help us improve performance, enhance user experience and deliver our services. By using our services, you agree to our use of cookies. Find out more.