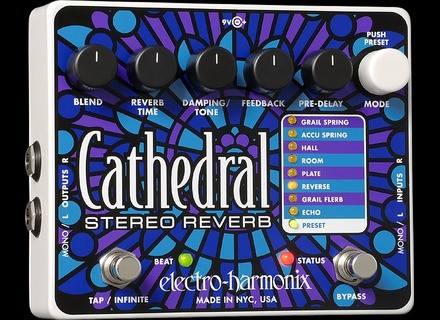 Cathedral, Reverb for Guitar from Electro-Harmonix.

At first look, this strikes me as a reverb pedal with the perfect "not too many but not too few" knobs. It's not like a boss reverb where it has 3 knobs. But it's no eventide where you will spend an hour on it. The cathedral is a fairly visual and menu free affair. You have your typical blend, time, and damp knobs. Then you have feedback and pre-delay which I think are a little excessive but hey, at least I don't have ti access a menu to get them. It has 7 total modes plus an echo. All stereo sound. You get about every style of reverb you would need. This is also a great studio pedal in case you haven't guessed that by now.

Bottom line, with all the knobs you are allotted, if you can't dial in the reverb you are looking for then I pity you. I use this in an ambient instrumental band and it can basically dial in any sort of reverb tone you need. There's a point with units like this where adding more tweakable parameters is just peanuts. You don't need more than this. Serious.

The question really isn't whether it has enough bells and whistles to work. Clearly on paper it's a sick pedal. But does it sound good? Well short answer, yeah. It's not going to sound like a real vintage spring reverb or a high end Lexicon hall reverb. Don't realistically expect that. But it does sound very good for a pedal in this price range. And better yet, pretty much every mode is usable. How bout that? It doesn't color the sound as much as I thought it would. Kind of depends how you set it really. The tap switch is a great idea and I think it puts this pedal into the must have area.

The only gripe I have is how cheap it feels. Granted, it has not gone south on me, but I've only owned it for a year and I haven't used it as much as a lot of people would. So we will see. It's not noisy. I don't think this pedal is a deal by any means. But unless you wanna shell out money for a space echo or something, this is about as good as it gets under $250. Kind of a bummer that there aren't a whole lot of verb units out there right now.
Did you find this review helpful?yesno